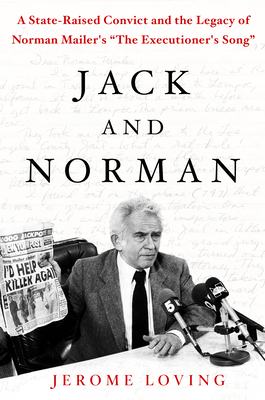 Norman Mailer was writing The Executioner’s Song, his novel about condemned killer Gary Gilmore, when he struck up a correspondence with Jack Henry Abbott, Federal Prisoner 87098-132. Over time, Abbott convinced the famous author that he was a talented writer who deserved another chance at freedom. With letters of support from Mailer and other literary elites of the day, Abbott was released on parole in 1981.

With Mailer’s help, Abbott quickly became the literary “it boy” of New York City. But in a shocking turn of events, the day before a rave review of Abbott’s book, In the Belly of the Beast, appeared in The New York Times, Abbott murdered a New York City waiter and fled to Mexico. Eerily, like Gary Gilmore in Mailer’s true-life novel, Abbott killed within six weeks of his release from prison.

Now Jerome Loving explores the history of two of the most infamous books of the past 50 years, a fascinating story that has never before been told.

JEROME LOVING is the Distinguished Professor of English at Texas A&M University. Loving has taught as a visiting professor at the University of Texas in Austin and as a Fulbright Scholar at Leningrad State University. He is the author of Jack and Norman.

Praise For Jack and Norman: A State-Raised Convict and the Legacy of Norman Mailer's "The Executioner's Song"…

"Jerome Loving tells the story of a famous mistake in law and literature with great authority. He juxtaposes a serial criminal, Jack Henry Abbott, and one of our most renowned writers, Norman Mailer, in a tragic dance of affirmation and denial. Among other things, this book is a devastating portrayal of our prison system."
—Robert A. Ferguson, George Edward Woodberry Professor of Law, Literature, and Criticism, Columbia University, and author of Inferno: An Anatomy of American Punishment

"Here are three impulsive, self-absorbed men--one a lionized cultural giant, the other two doomed from birth and hardened in prison to become remorseless killers. Somehow a major book, The Executioner's Song, results from their unlikely intersection. These are the makings of Jerome Loving's sad, ironic tale, at once an indictment of American incarceration and a reminder, if we needed one, that literary talent is no guarantee of respect for the lives of others." —Frederick Crews, author of Follies of the Wise and Freud: The Making of an Illusion (forthcoming)

"A story of American incarceration, cross-stitched with the friendship between a larger-than-life author and his state-raised convict apprentice. Luminous, unflinching, and unforgettable." —Wai Chee Dimock, Professor of English and American Studies, Yale University

"Part literary criticism, part social commentary, and part true crime story, this riveting book chronicles Abbott’s existence as a 'state-raised convict' who, as he recounted in his debut book, In the Belly of the Beast, spent most of his life in the dehumanizing prison system. Abbott won his petition for parole thanks in part to Mailer’s support, but not long after his release, Abbott murdered Richard Adan, a restaurant manager and aspiring playwright, and was caught and returned to prison. Loving’s gripping book offers a page-turning case study of the disturbing character of the American prison system and the fascinating compulsion that can drive writers to seek literary celebrity." —Publishers Weekly

"Loving hits all the notes he’s supposed to hit while carving out a slice of literary history, generously quoting from unpublished letters: He sets up Mailer’s fascination with criminality and his failures of empathy, and questions whether Mailer took enough responsibility when his artistic ideals clashed with real-life consequences. Loving also uses the episode to try to illustrate larger failings of the criminal justice system, an issue that fits awkwardly around the contours of a smaller-scale, if still ethically complicated, tale of the ruined remnants of 1950s literary culture. Jack and Norman is a book that makes one wonder why it took so long for someone to write a full-length treatment of the whole mess." —New Republic

"A sympathetic telling of the life and death of an infamous convict and the ill-fated intervention of a famed writer." —Kirkus Reviews