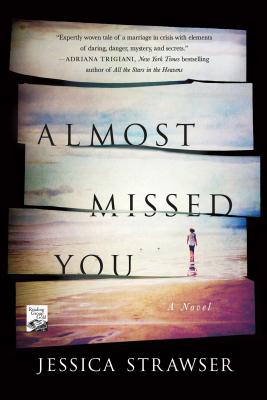 Violet and Finn were “meant to be,” said everyone, always. They ended up together by the hands of fate aligning things just so. Three years into their marriage, they have a wonderful little boy, and as the three of them embark on their first vacation as a family, Violet can’t help thinking that she can’t believe her luck. Life is good.

So no one is more surprised than she when Finn leaves her at the beach—just packs up the hotel room and disappears. And takes their son with him. Violet is suddenly in her own worst nightmare, and faced with the knowledge that the man she’s shared her life with, she never really knew at all.

Caitlin and Finn have been best friends since way back when, but when Finn shows up on Caitlin’s doorstep with the son he’s wanted for kidnapping, demands that she hide them from the authorities, and threatens to reveal a secret that could destroy her own family if she doesn’t, Caitlin faces an impossible choice.

As the suspenseful events unfold through alternating viewpoints of Violet, Finn and Caitlin, Jessica Strawser's Almost Missed You is a page turning story of a mother’s love, a husband’s betrayal, connections that maybe should have been missed, secrets that perhaps shouldn’t have been kept, and spaces between what’s meant to be and what might have been.

"Almost Missed You is a skillful, insightful debut: a deft exploration of the mysteries of marriage, the price we pay for our secrets, and just how easy it is to make the worst choices imaginable." —Chris Bohjalian, New York Times bestselling author of The Sandcastle Girls and Midwives

"Almost Missed You is an emotional powerhouse of a novel." —Garth Stein, New York Times bestselling author of A Sudden Light and The Art of Racing in the Rain

"In Almost Missed You, debut author Jessica Strawser meticulously weaves together a kidnapped child, friends in turmoil, and a Craigslist ad into a tangled web of secrets, lies, and unexpected alliances. This heart-breaking page-turner will make you question how well you really know everyone you hold dear." — Amy Sue Nathan, author of The Glass Wives

"Jessica Strawser has expertly woven a tale of a marriage in crisis with elements of daring, danger, mystery, and secrets that will surprise and delight you...Glorious!" — Adriana Trigiani, New York Times bestselling author of All the Stars in the Heavens