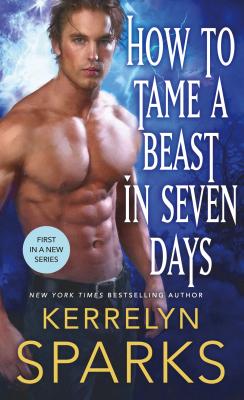 How to Tame a Beast in Seven Days

A Novel of the Embraced

From the brilliant imagination of Kerrelyn Sparks comes a bold new fantasy romance series in which passion and magic collide. Behold the Embraced...

As one of the Embraced—one born with magical powers—the beautiful, innocent Luciana escaped certain death after her father hid her away on the Isle of Moon. Now, nineteen years later, her father has returned with a frightening request. He will be executed unless Luciana returns to the mainland and marries a man feared throughout the land: a terrifying brute known as the Beast.

Luciana accepts her fate and agrees to wed the Beast—Lord Leo—in order to save her father. Soon she learns that her betrothed is also one of the Embraced. With the ability to wield lightning, Leo’s immense power strikes fear into the hearts of men. . .and his mere touch can put an end to a woman’s life. But Luciana cannot deny the passion that burns between them. How can she resist the man who scorches her soul and makes her feel intoxicated with desire—even if surrendering to him could destroy them both?


Praise For How to Tame a Beast in Seven Days: A Novel of the Embraced…

"Sparks starts a delightful new paranormal-romance series...Readers will relish Spark’s lovingly detailed and memorable tale and look forward to the next." --Booklist

"Sparks creates an intricate, layered world that’s easy to fall into without tons of backstory needed. This story is a joy to read. The Beast, Lord Leo, is everything you’d want, without being so dark he irks you. Readers will be fully invested in this Embraced series!" --RT Book Reviews (Top Pick!)

Kerrelyn Sparks apparently has issues with reality. After writing more than a dozen books about vampires, she has now completely gone off the deep end and wound up on another planet. But how thrilling that she can share this magical new world with her readers! Although she is best known (so far) for the Love at Stake series, which has hit as high as number 5 on the New York Times list and 22 on the USA Today list, she hopes her readers will love The Embraced as much as they did her merry band of vamps and shifters. To learn more about her paranormal, historical, and new out-of- this-world fantasy romances, please visit Kerrelyn on Facebook, Twitter, or her website.
Loading...
or
Not Currently Available for Direct Purchase