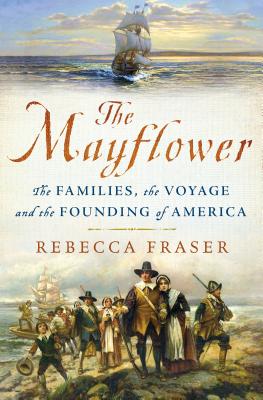 The Families, the Voyage, and the Founding of America

From acclaimed historian and biographer Rebecca Fraser comes a vivid narrative history of the Mayflower and of the Winslow family, who traveled to America in search of a new world.

“There is nothing sleep-inducing about the chronicle crafted by Ms. Fraser . . . There is more to the Pilgrims’ story—more to American identity and character—than our Thanksgiving rituals and reveries.” —Wall Street Journal

The voyage of the Mayflower and the founding of Plymouth Colony is one of the seminal events in world history. But the poorly-equipped group of English Puritans who ventured across the Atlantic in the early autumn of 1620 had no sense they would pass into legend. They had eighty casks of butter and two dogs but no cattle for milk, meat, or ploughing. They were ill-prepared for the brutal journey and the new land that few of them could comprehend. But the Mayflower story did not end with these Pilgrims’ arrival on the coast of New England or their first uncertain years as settlers. Rebecca Fraser traces two generations of one ordinary family and their extraordinary response to the challenges of life in America.

Edward Winslow, an apprentice printer, fled England and then Holland for a life of religious freedom and opportunity. Despite the intense physical trials of settlement, he found America exotic, enticing, and endlessly interesting. He built a home and a family, and his remarkable friendship with King Massassoit, Chief of the Wampanoags, is part of the legend of Thanksgiving. Yet, fifty years later, Edward’s son Josiah was commanding the New England militias against Massassoit’s son in King Philip’s War.

The Mayflower is an intensely human portrait of the Winslow family written with the pace of an epic. Rebecca Fraser details domestic life in the seventeenth century, the histories of brave and vocal Puritan women and the contradictions between generations as fathers and sons made the painful decisions which determined their future in America.


Praise For The Mayflower: The Families, the Voyage, and the Founding of America…

“There is nothing sleep-inducing about the chronicle crafted by Ms. Fraser . . . the Thanksgiving Day events so central to American identity and character merit a mere three sentences in a book that spans more than 300 pages. The lesson: There is more to the Pilgrims’ story—more to American identity and character—than our Thanksgiving rituals and reveries.” —Wall Street Journal

“Superbly written and enthralling … The Mayflower reads as though it were historical fiction, with avaried cast of characters and perspectives, fine details, background histories, and a holistic approach.”
—Booklist

“Fraser’s smooth storytelling provides a revealing look into the development of the [Plymouth] colony. The story of the Winslows is an effective way to experience the emotions and fears of the small band who dauntlessly sailed off to the New World.” —Kirkus Reviews

“Rebecca Fraser tells this familiar story with wonderful immediacy; the Winslows come across not as strange characters from the distant past, but as real people with passions and anxieties familiar to us all. . . . Fraser’s account of the Pilgrims’ progress will disappoint those who like their history simple. Hers is not a story of virtuous Pilgrims fighting to survive in a hostile land, nor is it about noble Native Americans duped by perfidious Albion. It is, though, a story of how friendships and community are destroyed by greed and vanity.” —The Times (UK)

“Epic in scope and pacing, this account of survival feels intimate, connecting readers to both groups in a refreshing way . . . The author’s inclusion of indigenous history along with the struggles of women pilgrims and their importance to the community’s success is both appreciated and necessary . . . An engaging popular history. For readers of David McCullough and Ron Chernow.” —Library Journal

“Captivating, scholarly and addictively readable . . . Rebecca Fraser has the rare gift of being able to marshal and communicate a mountainous quantity of often original research in such a deft and elegant manner that it never becomes indigestible or irrelevant.” —Financial Times (UK)

“A brilliant combination of synthesis and original research arriving in good time for the celebration of the quincentenary of the Mayflower. It should also give a heavy burp of indigestion to the customary turkey-and-cranberry-sauce celebration of Thanksgiving next month, with its reminder of the way in which Winslow’s ideals of ‘love, peace and holiness’ gave way to a horrible, genocidal sequel.” —The Spectator

“A superb account . . . This book stands as a significant contribution to the already well documented field of Pilgrim history . . . a must read for those interested in the unique beginnings of America” – Cynthia Hagar Krusell, Historian and Author of The Winslows of Careswell in Marshfield

“Rebecca Fraser’s exquisitely researched book seems to offer something new to learn – and wonder over – on every page. . . . The Pilgrims believed that ‘the world could begin afresh in America,’ this gifted historian writes. As, eventually, it did. Deftly, indelibly, Fraser shows us the human cost.” – Penelope Rowlands, Journalist and Author of Aaron Burr's Second Act

“The author puts the reader into the period with a front-row seat as the story unfolds . . . Fraser’s attention to historical detail is excellent and enhances this riveting book!” – Judith H. Swan, Former Governor General, General Society of Mayflower Descendants

“A well written and far ranging perspective on the Pilgrims and seventeenth century New England by a noted student of English history.” – Francis J.Bremer, Coordinator, New England Beginnings and Author of Lay Empowerment and the Development of Puritanism

REBECCA FRASER is a writer and broadcaster whose book, The Story of Britain, was described as "an elegantly written, impressively well-informed single-volume history of how England was governed during the past 2000 years.’" A contributor to the BBC History website, she is the author of a biography of Charlotte Brontë, and introductions to the Everyman editions of Shirley and The Professor. She was President of the Bronte Society for many years.
Loading...
or
Not Currently Available for Direct Purchase