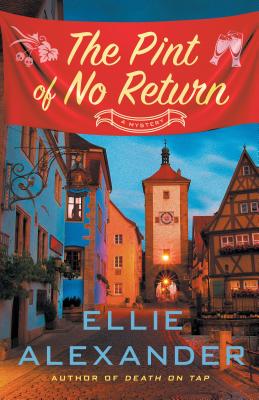 The Pint of No Return

A Mystery (A Sloan Krause Mystery #2)

Amateur sleuth Sloan Krause returns in The Pint of No Return, another delightful cozy by Ellie Alexander—this time investigating a movie star who's murdered not long after arriving in Leavenworth, WA to film his latest project.

No other festival compares to Oktoberfest in Leavenworth, Washington. The whole town is buzzing with excitement over this year’s activities and eagerly awaiting Nitro’s latest offering Cherrywizen, made with locally sourced cherries. But local brewmaster Sloan Krause is tapped out. Between trying to manage the pub, her pending divorce with Mac, and her mounting feelings for Garrett, she’s fermenting in internal turmoil.

To complicate matters, dreamy movie star Mitchell Morgan and his production crew have arrived in the village to film during the authentic Bavarian brewfest. Mitchell has his eye on Sloan and a taste for Nitro’s Cherrywizen. Sloan escapes his advances for good when she finds Mitchell slumped over the bar. Is this a case of one pint too many, or has Mitchell been murdered by microbrew?


Praise For The Pint of No Return: A Mystery (A Sloan Krause Mystery #2)…

Praise for The Pint of No Return:

"Satisfying...Alexander has created an appealing cast of characters and a lovely setting for them to live in. Best of all, she treats the reader to a fascinating look at the skill and artistry involved in brewing craft beer."—Publishers Weekly

"Aside from the interesting whodunit aspects of the case, the unusual and interesting characters involved, and the smooth writing style, what I found even more enjoyable were the descriptions of the various mouth-watering microbrews such as Cherrywizen and the intricate process of creating them."—Mystery Scene

"The second book to feature the sleuthing brewmaster is a light, seasonal read. The perfect brew for a fall afternoon."—Cleveland Plain Dealer

Praise for Death on Tap:

"A charming new series featuring Sloan Krause, a clever protagonist and a talented brewer whose knowledge of the science and art of brewing beer is both fascinating and fun. The cozy village and the quirky characters who inhabit it are a delight, and the intriguing mystery will keep readers enthralled to the very end." —Kate Carlisle, New York Times bestselling author of the Bibliophile and the Fixer-Upper Mysteries

"In Death on Tap, Ellie Alexander brews up a tasty concoction containing a charming setting, sympathetic characters, and a compelling heroine that kept me turning pages way past my bedtime."—Barbara Ross, author of the Maine Clambake Mysteries

"The mountain village of Leavenworth, Washington is hopping and trouble is brewing in this first in a new series by Ellie Alexander. Smooth yet yeasty, with a strong finish, like Sloan Krause’s best brew, Death on Tap is an entertaining sip of the world of brew pubs and tourist towns. Sloan, a foster child-turned chef, brewer, and mother, is an intriguing protagonist. Pour me another!" —Leslie Budewitz, two-time Agatha Award winning author of the Food Lovers’ Village Mysteries

"A 'hopping' good cozy mystery, overflowing with yeasty details about beer and brewing. Sloan may be torn between her cheating husband and her handsome new boss, but readers will enjoy listening to local gossip and tracking a killer along with her in the charming German-style "Beervaria" setting of Leavenworth, Washington." —Meg Macy, author of Bearly Departed

ELLIE ALEXANDER is a Pacific Northwest native who spends ample time testing pastry recipes in her home kitchen or at one of the many famed coffeehouses nearby. When she's not coated in flour, you'll find her outside exploring hiking trails and trying to burn off calories consumed in the name of research. She is the author of the Bakeshop Mysteries, including Meet Your Baker and A Batter of Life and Death, as well as the Sloan Krause mysteries.
Loading...
or support indie stores by buying on
(This book is on backorder)