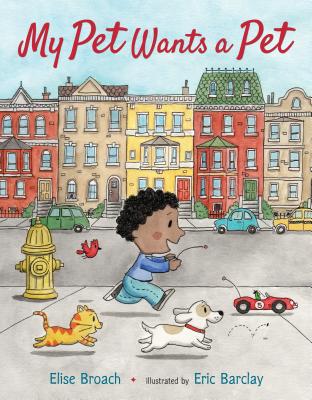 My Pet Wants a Pet

A charming picture book that cleverly captures a universal wish—to love and care for something—and shows that you're never too little to share in that dream, by New York Times­-bestselling author Elise Broach.


Praise For My Pet Wants a Pet…

"This sweet story with beautifully vivid illustrations demonstrates how caring for others leads to personal happiness. A winning choice for storytime and family sharing."--School Library Journal

"Barclay’s illustrations are jaunty and cartoonlike, reminiscent of the work of Richard Scarry, with all characters—two-legged, four-legged, or no-legged—having a fantastic time playing and chasing each other. . . Great comedy throughout, with an inspiring closer."--Booklist

"Barclay’s simple, cheery ink-and-watercolor pictures emphasize the joy shared by the boy and the many pets . . . Broach’s language is similarly straightforward as she underscores the responsibilities and rewards of caring for another and the expansive possibilities of family."--Publishers Weekly

"From Broach and Barclay comes a story about the affection that grows between living beings who care for one another. . . . A sweet choice for a simple story that parents and children will enjoy laughing at together."--Kirkus Reviews

Eric Barclay is the creator of I Can See Just Fine, Hiding Phil, and Counting Dogs. He has also illustrated several books for young readers. He lives in Texas with his family.
Loading...
or support indie stores by buying on