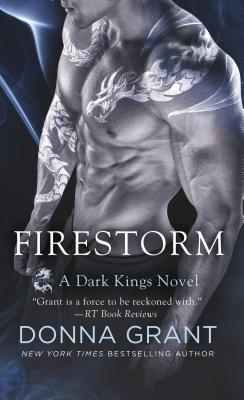 Unblemished fair skin beckoned him to touch, to caress.

He clenched his teeth at the need that surged through him.

Dimitri lives to protect the secret of the Dragon Kings from the human race. Bound by a bond stronger than blood to the Kings, Dimitri uses his strength and prowess to defend a thousand-year-old secret. But when an oh-so-sexy, slightly absent-minded archaeologist wanders into his midst, Dimitri will have to give up his rules, and give in to desire...

When Dr. Faith Reynold stumbles upon an ancient skeleton that appears it comes from a dragon, she’s completely taken aback. A woman of science, there’s no way in her mind that this mythological creature can exist. But when a devilishly handsome man named Dimitri intercepts her path to uncovering the truth, Faith’s curiosity turns into all-consuming passion. She’s never felt this way about any man before. But when Dimitri reveals his biggest secret, can she learn to love the man—as well as the dragon within, in Firestorm, the next Dark Kings novel by New York Times bestselling author Donna Grant.

“Ms. Grant does not disappoint the recesses of the heart with Soul Scorched.” -Reader to Reader

“Donna Grant continues to build on the series... there is an attachment to the characters that you don't want to end.” -San Francisco Book Review on Soul Scorched

“Donna Grant has given the paranormal genre a burst of fresh air.” -San Francisco Chronicle on Darkest Flame

“Packed with all the wonderful sizzle and chemistry fans have come to expect from Grant.” -RT Book Reviews on Darkest Flame

“4 Stars! Loaded with subtle emotions, sizzling chemistry and some provocative thoughts on the real choices [Grant's] characters are forced to make as they choose their loves for eternity.” -RT Book Reviews on Dark Heat

“Super storyteller Grant returns with the second back-to-back release in the Dark Warrior series. All of Grant's characters must face not only external threats, but also their own inner demons, lending an extra depth and drama to the stories.” -RT Book Reviews on Dark Warrior

“Once again, Donna Grant has given the readers a great story.” -Night Owl Reviews Top Pick on MIDNIGHT'S PROMISE

“A 5 Star, not to miss, read!” -Night Owl Reviews on MIDNIGHT’S KISS

“This story is one you will remember long after the last page is read.” -Romance Junkies on MIDNIGHT’S KISS

“4 Stars! The world of the Immortal Warriors is a thoroughly engaging one, blending powerful ancient gods, fiery desire, and touchingly human love, which readers will surely want to revisit.” -RT Book Reviews on MIDNIGHT'S KISS

“4 1/2 Stars! Grant has crafted a chemistry between her wounded alpha and surprisingly capable heroine that will, no doubt, enthrall series fans and newcomers alike.” -RT Book Reviews on MIDNIGHT’S CAPTIVE

“5 Stars! Ms. Grant brings together two people who are afraid to fall in love and then ignites sparks between them.” -Single Title Reviews on MIDNIGHT’S WARRIOR

“4 Stars! Grant again proves that she is a stellar writer and a force to be reckoned with.” -RT Book Reviews on MIDNIGHT’S SEDUCTION

“Sizzling love scenes and engaging characters fill the pages of this fast-paced and immersive novel.” -Publishers Weekly on MIDNIGHT’S SEDUCTION

“4 Stars. It's good vs. evil Druid in the next installment of Grant's Dark Warrior series. The stakes get higher as discerning one's true loyalties becomes harder. Grant's compelling characters and the continued presence of previous protagonists are key reasons why these books are so gripping. Another exciting and thrilling chapter!” -RT Book Reviews on MIDNIGHT'S LOVER

“Paranormal elements and scorching romance are cleverly intertwined in this tale of a damaged hero and resilient heroine.” ?Publishers Weekly on MIDNIGHT'S LOVER

“Every book is an escape from the humdrum into a world of magic and fiery romance.” -Fresh Fiction on MIDNIGHT'S LOVER

“4 Stars! Grant creates a vivid picture of Britain centuries after the Celts and Druids tried to expel the Romans, deftly merging magic and history. The result is a wonderfully dark, delightfully well-written tale. Readers will eagerly await the next Dark Sword book.” -Romantic Times BOOKreviews on the Dark Sword series

“Totally captivating and entertaining...Cursed by dark magic, the immortal MacLeod brothers are a force to be reckoned with.” -Fresh Fiction on the Dark Sword series