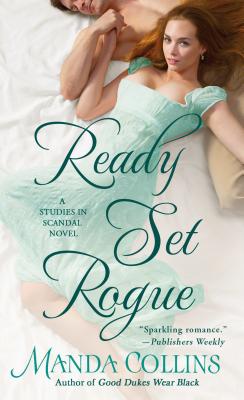 A Studies in Scandal Novel

WHO WILL WRITE THE BOOK OF LOVE?

When scholarly Miss Ivy Wareham receives word that she’s one of four young ladies who have inherited Lady Celeste Beauchamp’s estate with a magnificent private library, she packs her trunks straightaway. Unfortunately, Lady Celeste’s nephew, the rakish Quill Beauchamp, Marquess of Kerr, is determined to interrupt her studies one way or another...

Bequeathing Beauchamp House to four bluestockings—no matter how lovely they are to look at—is a travesty, and Quill simply won’t have it. But Lady Celeste’s death is not quite as straightforward as it first seemed…and if Quill hopes to solve the mystery behind her demise, he’ll need Ivy’s help. Along the way, he is surprised to learn that bookish Ivy stirs a passion and longing that he has never known. This rogue believes he’s finally met his match—but can Quill convince clever, skeptical Ivy that his love is no fiction?


Praise For Ready Set Rogue: A Studies in Scandal Novel…

"Displaying a deft hand at characterization, a superb ability to craft an engaging plot spiced with intrigue and danger, and a remarkable flair for graceful writing richly imbued with a deliciously crisp wit, Collins launches the Studies in Scandal series on a high note." —Booklist (Starred review)

"Ready Set Rogue has an assortment of bold, brilliant female characters and showcases the strength and resourcefulness of women." — Fresh Fiction

"This story is classic Manda Collins, her writing is witty, smart and is full of surprises. This series is going to be a keeper to read again and again." —The Reading Wench

Manda Collins grew up on a combination of Nancy Drew books and Jane Austen novels, and her own brand of Regency romantic suspense is the result. An academic librarian by day, she investigates the mysteries of undergraduate research at her alma mater, and holds advanced degrees in English Lit and Librarianship. Her debut novel, How to Dance with a Duke spent five weeks on the Nielsen Bookscan Romance Top 100 list, was nominated for an RT Reviewer's Choice Award for best debut historical romance, and finaled in the Gayle Wilson Award of Excellence contest. Both How to Entice an Earl and Why Dukes Say I Do were selected for inclusion in Eloisa James's Reading Romance column. Her latest book, Why Earls Fall in Love, a February 2014 release, was called "sparkling romance" by Publishers Weekly and is set in Bath, England, one of her favorite cities in the world.
Loading...
or
Not Currently Available for Direct Purchase