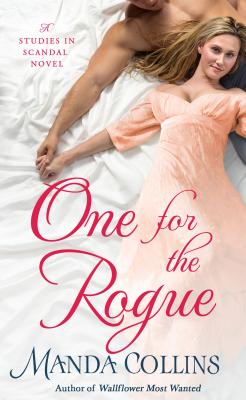 One for the Rogue (Studies in Scandal #4)

Two rivals join forces to solve a mystery, but might just find love, in One for the Rogue, the next thrilling novel in the Studies in Scandal series by Manda Collins.

LOVE IS THE GREATEST DISCOVERY OF ALL

Geologist Gemma Hastings has no interest in pursuing romance—and no patience for Lord Cameron Lisle, an esteemed fossil hunter who has a way of always honing in on her territory. . .annoyingly handsome though he may be. But when a shocking attack puts Gemma in very real danger, she may have to accept Lisle’s offers of protection. Even if that means entering into a dangerous flirtation. . .

Lisle was once amused by Gemma’s dedication to her work. But now that he understands how much he’s underestimated her—a woman whose beauty is matched only by her genius—Lisle is desperate to prove his respect…and prove himself worthy of her. But is he too late? A bitter rival, desperate to steal Gemma’s scientific findings, is still at-large. Can Lisle help uncover the culprit and keep her safe—forever, in his loving arms?


Praise For One for the Rogue (Studies in Scandal #4)…

"Readers who like their Regency historicals smart, sexy, and served up with plenty of dry wit and a generous dollop of intrigue will find One for the Rogue, the latest sparkling addition to Collins’ Studies in Scandal series, to be a rare find." -- Booklist

"The heroine, Gemma, is a geologist (yay historical STEM heroines!) as is the hero, Cameron, and I just love watching two people with shared passions (for rocks and each other) not be able to resist falling in love!" -- Book Riot

"One for the Rogue stands out for its fierce dedication to developing interesting, engaging and worthwhile characters." -- BookPage

"A fine conclusion to a Regency series dedication to celebrating the intellectual and artistic achievements of women." -- Kirkus

Manda Collins grew up on a combination of Nancy Drew books and Jane Austen novels, and her own brand of Regency romantic suspense is the result. An academic librarian by day, she investigates the mysteries of undergraduate research at her alma mater, and holds advanced degrees in English Lit and Librarianship. Her debut novel, How to Dance with a Duke spent five weeks on the Nielsen Bookscan Romance Top 100 list, was nominated for an RT Reviewer's Choice Award for best debut historical romance, and finaled in the Gayle Wilson Award of Excellence contest. Both How to Entice an Earl and Why Dukes Say I Do were selected for inclusion in Eloisa James's Reading Romance column. Her latest book, Why Earls Fall in Love, a February 2014 release, was called "sparkling romance" by Publishers Weekly and is set in Bath, England, one of her favorite cities in the world.
Loading...
or support indie stores by buying on
(This book is on backorder)