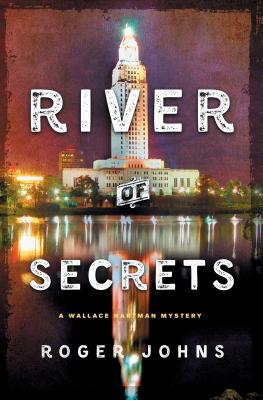 When a controversial politician is murdered in cold blood, Baton Rouge Police Detective Wallace Hartman struggles to find the killer amid conspiracies and corruption in River of Secrets, a gripping new mystery from Roger Johns.

Herbert Marioneaux, a Louisiana politician infamous for changing his mind on hot-button issues, has been murdered and his body posed to send a message. Baton Rouge homicide detective Wallace Hartman has to figure out who’s sending that message. DNA points to Eddie Pitkin, a social justice activist who also happens to be the half-brother of Wallace’s childhood best friend. But even with the combative history between Pitkin and Marioneaux, murder seems out of character for Pitkin, whose usual MO is to confront the wealthy and powerful with their inconvenient past. As Wallace digs deeper, she unearths a possible alibi witness, along with evidence of a deeply troubled relationship that points the finger of suspicion at Marioneaux’s son.

While Eddie’s supporters are convinced of his innocence, his enemies are equally certain of his guilt. Under pressure from all directions, Wallace pursues her investigation into the dark heart of the political establishment as Baton Rouge falls under the shadow of escalating violence. When it appears a police department insider may be sabotaging her efforts by leaking information about the case, and after menacing messages are left for her and her loved ones, Wallace is forced to untangle a trail of old and disturbing secrets unaided by those she most needs to trust.

"A worthy sequel with plenty of procedural detail and a shattering conclusion." —Kirkus Reviews

"[A] thrilling police procedural that isn't afraid to look at the harder political questions that confront our modern era...highly recommended." —Criminal Element

"[A] spot-on portrait of Baton Rouge, River of Secrets is one of those mysteries that’ll be hard for any reader to put down." —The Baton Rouge Advocate

“Roger Johns paints a beautiful and dangerous picture of Baton Rouge. . . . Dark River Rising is crime fiction at its finest, a fascinating blend of atmosphere, a compelling mystery and a protagonist you won’t soon forget.” —Linda Castillo, best-selling author of the Kate Burkholder mysteries

“Johns' first novel is an exciting police procedural rolled into a romantic thriller that hints of more to come.” —Kirkus Reviews

“Dark River Rising has a finely crafted ensemble and a balanced grace that makes this debut novel as hard to resist as blue ribbon gumbo.” —Craig Johnson

ROGER JOHNS is a former corporate lawyer and college professor with law degrees from Louisiana State University and Boston University. He was born and raised in Louisiana, though he and his wife now live in Georgia. Dark River Rising is his first novel.
Loading...
or
Not Currently Available for Direct Purchase