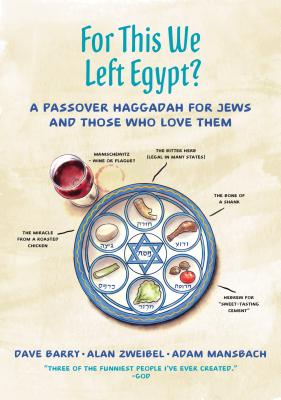 For This We Left Egypt?

A Passover Haggadah for Jews and Those Who Love Them

The book you hold before you is no ordinary Haggadah. If you’ve ever suffered through a Seder, you’re well aware of the fact that the entire evening can last as long as the exodus from Egypt itself. There are countless stories, dozens of blessings, and far too many handwashings while the meal turns cold. Now prepare to be entertained by another version of the book that’s responsible for this interminable tradition.

With this hilarious parody Haggadah from the comedic minds of Dave Barry, Alan Zweibel, and Adam Mansbach, good Jews everywhere will no longer have to sit (and sleep) through a lengthy and boring Seder. In For This We Left Egypt?, the authors will be take you through every step of the Seder, from getting rid of all the chametz in your home by setting it on fire with a kosher blowtorch to a retelling of the Passover story starring Pharaoh Schmuck and a burning bush that sounds kind of like Morgan Freeman, set against the backdrop of the Promised Land—which turned out not to be a land of milk and honey but rather one of rocks and venomous scorpions the size of Yorkshire terriers. You then eat a celebratory brisket and wrap up the whole evening by taking at least forty-five minutes to say good-bye to everyone.

So gather all the Jews in your life (even the few who don’t appear to be long-suffering) and settle in for a fun way to pass the time while waiting for Elijah to show up.


Praise For For This We Left Egypt?: A Passover Haggadah for Jews and Those Who Love Them…

“Three comic writers have some fun with Passover. Seders may never be the same.” —USA Today

“A full-fledged comic assault on Passover… Finally, someone has created a full Haggadah that is not only fun to read, but isn’t covered in wine stains… For This We Left Egypt? runs riot with the Haggadah and takes readers from the sophomoric to the sublimely funny.” —The Forward

“Three well-known humorists have written a Haggadah for an overlooked crowd: the wiseguys, cutups, and punsters who frankly have a hard time taking the whole thing seriously.” —Jewish Telegraph Agency

“[Barry, Zweibel, and Mansbach] have joined forces to come up with the perfect humoristic antidote to this Passover ritual… [For This We Left Egypt?] is a loudly humorous, acerbic parody of the haggadah, as it dissects every aspect of the Passover holiday… All in all, a new Passover tradition can be established with For This We Left Egypt?” —Montreal Times

“A must-have for those who collect haggadot or for anyone who loves a laugh. If you’re looking to lighten up your seder, you might read a page or two from it. Just be careful, though: people might refuse to turn back to the traditional text.” —The Reporter

“[For This We Left Egypt?] brings a fair measure of levity to a holiday when leavening is banned. The book is both reverential and irreverent.” —New York Jewish Week

An original Saturday Night Live writer, Alan Zweibel has won numerous Emmy and Writers Guild of America awards for his work in television, which also includes It’s Garry Shandling’s Show (which he co-created), Late Show with David Letterman, and Curb Your Enthusiasm. He collaborated with Billy Crystal on the Tony Award–winning play 700 Sundays, and he won the Thurber Prize for his novel The Other Shulman.

Adam Mansbach is the #1 New York Times bestselling author of Go the F*** to Sleep and You Have to F****** Eat, as well as the California Book Award–winning novel The End of the Jews, a dozen other books, and the movie Barry. His work, which has been translated into more than forty languages, has appeared in The New Yorker, The New York Times Book Review, Esquire, and The Believer and on National Public Radio’s All Things Considered and This American Life.
Loading...
or support indie stores by buying on