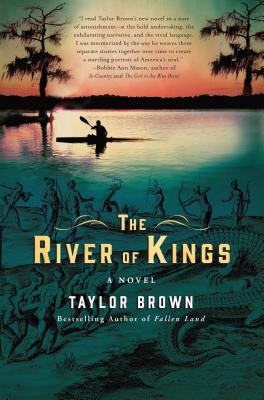 “In his second novel, Taylor Brown takes us on a fascinating trip down the Altamaha River. Also called Georgia's 'Little Amazon,' the river is one of the most remote and wild places in the U.S. This is where the Loggins brothers, Hunter and Lawton, grew up with their abusive father. After he dies under mysterious conditions, they decide to kayak down the river to disperse his ashes and try to discover what really happened. Brown combines the story of the brothers' journey and descriptions of their father's rough life with a narrative of the 1564 French expedition and settlement at the river's mouth. Three stories in which nature takes center stage intertwine to give this superb novel an almost mythical dimension.”
— Pierre Camy (W), Schuler Books & Music, Grand Rapids, MI
View the List

TAYLOR BROWN grew up on the Georgia coast. He has lived in Buenos Aires, San Francisco, and the mountains of western North Carolina. He is the recipient of the Montana Prize in Fiction and a finalist for the Southern Book Prize. His novels include Fallen Land, The River of Kings, and Gods of Howl Mountain. He lives in Savannah, Georgia.
Loading...
or
Not Currently Available for Direct Purchase