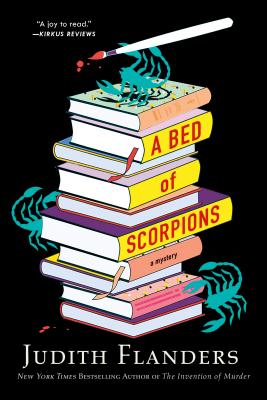 A Bed of Scorpions

New York Times Bestselling Author of The Invention of Murder

Summer in London—the sun is finally shining, the flowers are in bloom, and life is humming merrily along for book editor Samantha Clair, off to lunch with her old friend, art dealer Aidan Merriam.

Armed with nothing more than her trusty weapons of satire, cynicism, and a stock of irrelevant information culled from novels, Sam races to find a killer who is determined to find her first in this fast-paced, uproarious novel.


Praise For A Bed of Scorpions: A Mystery (Sam Clair #2)…

"Sam's second appearance (A Murder of Magpies, 2015, etc.) is a joy to read, filled with diverting characters, a socially clumsy but clever heroine, and a mystery filled with dubious characters." --Kirkus Reviews

"Art and money are the linchpins of Flanders’s enjoyable follow-up to 2015’s A Murder of Magpies...The finer points of book design, the navigation of Sam and Jake’s relationship, and a tense climax featuring archival shelving units add texture to the narrative." --Publishers Weekly