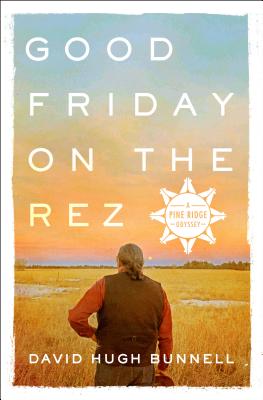 Good Friday on the Rez

Good Friday on the Rez follows the author on a one-day, 280-mile round-trip from his boyhood Nebraska hometown of Alliance to the Pine Ridge Indian Reservation in South Dakota, where he reconnects with his longtime friend and blood brother, Vernell White Thunder. In a compelling mix of personal memoir and recent American Indian history, David Hugh Bunnell debunks the prevalent myth that all is hopeless for these descendants of Crazy Horse, Red Cloud, and Sitting Bull and shows how the Lakota people have recovered their pride and dignity and why they will ultimately triumph.

What makes this narrative special is Bunnell's own personal experience of close to forty years of friendships and connections on the Rez, as well as his firsthand exposure to some of the historic events. When he lived on Pine Ridge at the same time of the American Indian Movement's seventy-one-day siege at Wounded Knee in 1973, he met Russell Means and got a glimpse behind the barricades. Bunnell has also seen the more recent cultural resurgence firsthand, attending powwows and celebrations, and even getting into the business of raising a herd of bison.

Substantive and raw, Good Friday on the Rez is for readers who care about the historical struggles and the ongoing plight of Native Americans, and in particular, that of the Lakota Sioux, who defeated the U.S. Army twice, and whose leaders have become recognized as among America's greatest historical figures.

Good Friday on the Rez is a dramatic page-turner, an incredible true story that tracks the torment and miraculous resurrection of Native American pride, spirituality, and culture—how things got to be the way they are, where they are going, and why we should care.


Praise For Good Friday on the Rez: A Pine Ridge Odyssey…

"[A] fascinating account of a 280-mile road trip. In vivid prose, Bunnell weaves memories of his childhood and youth with a sweeping history of the Lakota during and since white expansion into the west. [T]his account... stands as a tribute to a seemingly defeated people who recovered their pride in the Wounded Knee standoff."—Publishers Weekly (starred review)

"Bunnell marries a heartfelt memoir with history. [He] keenly and with arresting detail observes the towns he encounters, comparing both past and present. With honesty and sensitivity, the author does much to explain the plight and inequities encountered by Native American communities. This informative account should be placed alongside all books on Native American history and culture. It deserves to be read by all, particularly in light of the recent Dakota Access Pipeline protests."—Library Journal

"David Hugh Bunnell's Good Friday on the Rez provides an honest, hard-hitting, and necessary glimpse into recent history for the Lakota people. The take-away for me, as a Lakota person, is that in spite of difficult times (to say the least), this book reminds me that we are still here, and why.?"—Joseph M. Marshall III, author of The Journey of Crazy Horse, The Lakota Way, and The Day the World Ended at Little Bighorn

"Emotional and eyeopening...Bunnell’s captivating account is comprised of a compelling mélange of childhood memories, his years teaching on the reservation, and his presence at crucial moments in Native struggles, including the AIM standoff at Wounded Knee in 1973. His descriptions of stops along his journey...leave indelible pictures in the reader’s mind."—Booklist

"Good Friday on the Rez is a rough memoir of alcohol, accidents, foster homes, murder, and disease. Yet there is a friendliness to Bunnell's narrative. When he texts his friend he’s on his way, Vernell texts back— 'I’ll put on the beans.' Bunnell remembers the history of a people and lassos the English language into a corral not its own. He uses his language to remember indigenous history and struggles. He writes a firestorm from nowhere. Bunnell's words should be in red, like the Savior’s words in the four directions of the gospels."—Diane Glancy, author of Pushing the Bear, Fort Marion Prisoners and the Trauma of Native Education and Report to the Department of the Interior

“If you believe History is more than dates and place names, David Bunnell is your man. Bunnell, who became a 'stranger in a strange land' during the Indian uprising at Wounded Knee in 1973, has stitched together a dramatic account that's part freedom laboratory and part carnival. A very good read.”—Kevin McKiernan, Pulitzer Prize-nominated documentary filmmaker

DAVID HUGH BUNNELL was a writer, photographer, editor and publisher best known as the founder of magazines, Web sites, and trade shows. He authored hundreds of articles and several books. He was a longtime active member and former director of the Northern California ACLU and founder of the nonprofit Andrew Fluegelman Foundation. David passed away in October 2016.
Loading...
or
Not Currently Available for Direct Purchase