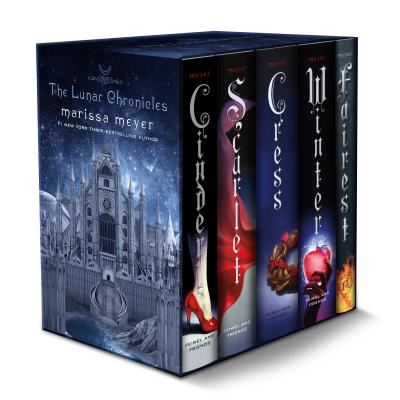 The #1 New York Times-bestselling series that brought fans a complex and thrilling world of cyborgs and evil queens is now available as a beautiful boxed set.

Cinder
Cinder, a gifted mechanic, is a cyborg. She's a second-class citizen with a mysterious past, reviled by her stepmother and blamed for her stepsister's illness. But when her life becomes intertwined with the handsome Prince Kai's, she suddenly finds herself at the center of an intergalactic struggle, and a forbidden attraction.

Scarlet
Scarlet Benoit's grandmother is missing. It turns out there are many things Scarlet doesn't know about her grandmother or the grave danger she has lived in her whole life. As Scarlet and a streetfighter named Wolf unravel one mystery, they encounter another when they meet Cinder.

Cress
Cinder and Captain Thorne are fugitives on the run, now with Scarlet and Wolf in tow. Together, they're plotting to overthrow Queen Levana and prevent her army from invading Earth. Their best hope lies with Cress, a girl trapped on a satellite since childhood who's only ever had her netscreens as company.

Fairest
In this stunning bridge book between Cress and Winter, Queen Levana's story is finally told!

Winter
Can Cinder, Prince Kai, Scarlet, Wolf, Cress, Thorne, Princess Winter, and the palace guard Jacin find their happily ever afters? Fans will love this amazing conclusion to the series.

Marissa Meyer is the #1 New York Times–bestselling author of the Renegades Trilogy, The Lunar Chronicles series, the Wires and Nerve graphic novels, and The Lunar Chronicles Coloring Book. Her first standalone novel, Heartless, was also a #1 New York Times bestseller. Marissa created and hosts a podcast called The Happy Writer. She lives in Tacoma, Washington, with her husband and their two daughters.
Loading...
or
Not Currently Available for Direct Purchase