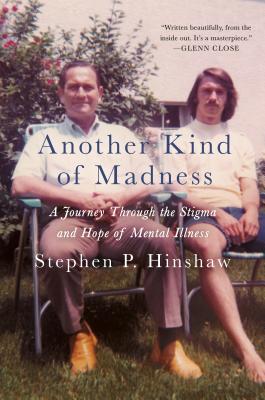 Another Kind of Madness

A Journey Through the Stigma and Hope of Mental Illness

Glenn Close says: "Another Kind of Madness is one of the best books I’ve read about the cost of stigma and silence in a family touched by mental illness. I was profoundly moved by Stephen Hinshaw’s story, written beautifully, from the inside-out. It’s a masterpiece."

Families are riddled with untold secrets. But Stephen Hinshaw never imagined that a profound secret was kept under lock and key for 18 years within his family—that his father’s mysterious absences, for months at a time, resulted from serious mental illness and involuntary hospitalizations. From the moment his father revealed the truth, during Hinshaw’s first spring break from college, he knew his life would change forever.

Hinshaw calls this revelation his “psychological birth.” After years of experiencing the ups and downs of his father’s illness without knowing it existed, Hinshaw began to piece together the silent, often terrifying history of his father’s life—in great contrast to his father’s presence and love during periods of wellness. This exploration led to larger discoveries about the family saga, to Hinshaw’s correctly diagnosing his father with bipolar disorder, and to his full-fledged career as a clinical and developmental psychologist and professor.

In Another Kind of Madness, Hinshaw explores the burden of living in a family “loaded” with mental illness and debunks the stigma behind it. He explains that in today’s society, mental health problems still receive utter castigation—too often resulting in the loss of fundamental rights, including the inability to vote or run for office or automatic relinquishment of child custody. Through a poignant and moving family narrative, interlaced with shocking facts about how America and the world still view mental health conditions well into in the 21st century, Another Kind of Madness is a passionate call to arms regarding the importance of destigmatizing mental illness.


Praise For Another Kind of Madness: A Journey Through the Stigma and Hope of Mental Illness…

"This heartfelt memoir shares insights into the effects of mental illness on all involved." —Booklist

"Another Kind of Madness is one of the best books I’ve read about the cost of stigma and silence in a family touched by mental illness. I was profoundly moved by Stephen Hinshaw’s story, written beautifully, from the inside-out. It’s a masterpiece." —Glenn Close, award-winning actor and founder of Bring Change 2 Mind

"Stephen Hinshaw’s insightful memoir chronicles the effect of his father's lifelong bipolar disorder on the whole family. But the real subject is the crippling impact of hiding the disorder — even from the children — for decades. Another Kind of Madness is a revealing, personal, and poignant look at the stigma surrounding mental illness that, even today, delays effective diagnosis and treatment, undermines research, creates misunderstanding, and imposes misery on millions." —Harold S Koplewicz, MD, President, Child Mind Institute

"Smart, well-written and genuinely informative books that capture what it's like to love and live with a person with bipolar disorder are all but non-existent. Or were until now. Stephen Hinshaw's memoir of growing up in a home infused by the stresses -- and secrets -- of a father's long-misdiagnosed mental illness is alternately poignant and painful, yet always on the mark. With remarkable honesty and unflinching immediacy, he allows us to accompany him as he grows from a frightened child to a determined advocate and healer, taking on illness and stigma alike while wrestling with the residue of his complex family legacy. This book is a must-read for anyone grappling with serious mental illness and its fallout on families. Highly readable, yet informed by the latest science, it belongs in the waiting room of every family doctor and mental health practitioner -- and on the bookshelf of any reader who hopes to bring the hidden realities of mental illness into the light." —Judith Warner, author of We've Got Issues: Children and Parents in the Age of Medication

"In Another Kind of Madness, Hinshaw blends a memoir of family silence and shame in the face of severe mental disorder with a research-based exploration of the stigmatization of mental illness. He does so with grace and candor, juxtaposing his father's lifelong. misdiagnosed bipolar illness with 20th century medical and political history." —Ayelet Waldman, author of A Really Good Day

"Dr. Stephen Hinshaw has both the lived experience of being raised by a father with severe mental disorder and the psychological expertise to understand his father’s illness and its impact on the family. Hinshaw's writing is strong and his story compelling. His is also a narrative that needs to be heard—it will have a major impact on people with mental illness in the family, as well as on eradicating the pervasive stigma that still clings to mental illness." —Elyn R. Saks, Professor, University of Southern California and author ofThe Center Cannot Hold: My Journey Through Madness

"Stephen Hinshaw writes with rare, courageous honesty about madness as a family affair. His engrossing portrait of life with his brilliant, bipolar father weaves together intimate scenes of his family's responses to the absences and terror with an expert's reflection on the destructive toll of society's stigma regarding mental illness. This is an immensely readable and relevant story." —Katherine Ellison, Pulitzer-prize winning former foreign correspondent and author and co-author of three books about Attention Deficit/Hyperactivity Disorder

Stephen Hinshaw is a professor of psychology at UC Berkeley and of psychiatry at UC San Francisco. He has authored 350 scientific publications plus The Mark of Shame: Stigma of Mental Illness and an Agenda for Change (Oxford, 2007), the first U.S. book on mental illness stigma. His internationally renowned research has been covered in The New York Times, The Washington Post, Time, The Economist, and The Wall Street Journal, among others. He lives in Berkeley, CA.
Loading...
or
Not Currently Available for Direct Purchase