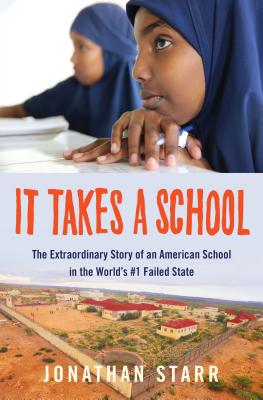 It Takes a School

A story of David and Goliath proportions, how an American hedge fund manager created a unique school in Somaliland whose students, against all odds, have come to achieve success beyond anyone’s wildest dreams

Jonathan Starr, once a cutthroat hedge fund manager, is not your traditional do-gooder, and in 2009, when he decided to found Abaarso, a secondary school in Somaliland, the choice seemed crazy to even his closest friends. “Why,” they wondered, “would he turn down a life of relative luxury to relocate to an armed compound in a breakaway region of the world’s #1 failed state?” To achieve his mission, Starr would have to overcome profound cultural differences, broken promises, and threats to his safety and that of his staff.

It Takes a School is the story of how an abstract vision became a transformative reality, as Starr set out to build a school in a place forgotten by the world. It is the story of a skeptical and clan-based society learning to give way to trust. And it’s the story of the students themselves, including a boy from a family of nomads who took off on his own in search of an education and a girl who waged a hunger strike in order to convince her strict parents to send her to Abaarso.

Abaarso has placed forty graduates and counting in American universities, from Harvard to MIT, and sends Somaliland a clear message: its children can compete with anyone in the world. Now the initial question Starr was asked demands another: “If such a success can happen in an unrecognized breakaway region of Somalia, can it not happen anywhere?”


Praise For It Takes a School: The Extraordinary Story of an American School in the World's #1 Failed State…

"One man's amazing accomplishment in founding a school amid a series of daunting challenges. It's hard to argue with Starr's impressive results: 'as of May 2016, Abaarso students have earned approximately $15 million in scholarships and financial aid, and the 2016-2017 school year will see almost ninety students studying around the world'...?Starr is proud of his accomplishments, and he deserves to be."?
-Kirkus Reviews

Jonathan Starr founded and led the private investment firm Flagg Street Capital, worked as an Analyst at SAB Capital and Blavin and Company, and as a Research Associate within the Taxable Bond Division at Fidelity Investments. Using a half million dollars from his personal finances, Starr created the Abaarso School in 2009. His work in Somaliland has been written about in The New York Times, Wall Street Journal, Bloomberg BusinessWeek, CNN, and the Christian Science Monitor.
Loading...
or
Not Currently Available for Direct Purchase