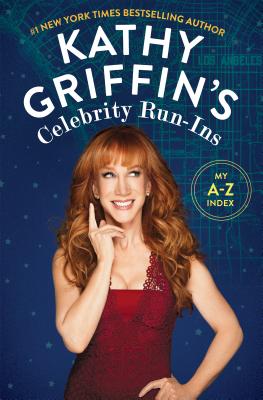 From #1 New York Times bestselling author Kathy Griffin, an A-Z compendium of her celebrity run-ins, and the jaw-dropping, charming, and sometimes bizarre anecdotes only she can tell about them.

Kathy Griffin’s Celebrity Run-Ins is Kathy’s funny, juicy index of all of the celebrities she has met during her many years in show business, bursting with never-before-told stories. Starting with Woody Allen and ending with Warren Zevon, Kathy Griffin’s Celebrity Run-Ins is a who’s who of pop culture: Leonardo DiCaprio, Nick Jonas, Kendall Jenner, Anna Kendrick, Lily Tomlin, Suge Knight, Barbra Streisand, Ashton Kutcher, Queen Latifah, Maria Shriver, Jared Leto, Selena Gomez, Meghan Trainor, Macklemore, Bruno Mars, Aaron Paul, Pink, Pitbull, Sia, Britney Spears, Taylor Swift, Christina Aguilera, and many more. Who would imagine that Kathy was an extra in a Michael Jackson commercial (guess which one)? That she and Salman Rushdie trade celebrity stories? That Donald Trump once drove Kathy and Liza Minelli around on a golf cart? That Sidney Poitier has a wicked sense of humor? That Demi Lovato has none? That David Letterman is still scared of Cher? That Channing Tatum is as polite as they come, and Tom Hanks might have the best perspective on fame of anyone? Kathy, that’s who. Kathy has met everyone, and after reading this book, you will feel as if you have, too.

Kathy Griffin has seen it all. Shocking and sidesplitting, Kathy Griffin’s Celebrity Run-Ins is an indispensable guide to the stars from one of our most beloved comedians. Can you handle it?

Kathy Griffin, a multi-Emmy Award-winning and Grammy-winning comedian and actress, is best known for her Bravo television reality show Kathy Griffin: My Life on the D-List, her multiple stand-up comedy specials on HBO, Comedy Central, and Bravo, and her four-year stint on the NBC sitcom Suddenly Susan. She has hosted several award shows and appeared on numerous talk shows including Late Night with David Letterman, The Tonight Show with Jay Leno, and The View, and she holds a Guinness World Record for having had more televised specials than any comedian, male or female. She performs to sold-out audiences at venues worldwide. Her memoir, Official Book Club Selection, was a #1 New York Times bestseller.
Loading...
or
Not Currently Available for Direct Purchase