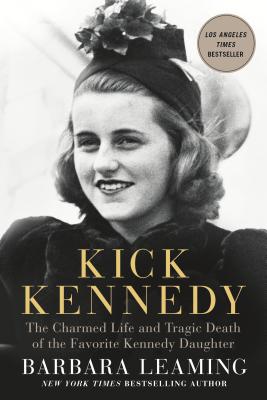 From a New York Times bestselling author comes a mesmerizing story of love, loss, and war.

An unforgettable portrait of the Kennedy family’s favorite daughter, Kick Kennedy begins with Kick’s arrival in England in 1938 as her father became the U.S. Ambassador to the Court of St James’s. In the closed world of the British aristocracy, Kick was gloriously, exhilaratingly different, the girl whom all the boys fell in love with. But she was the star of a world in the midst of tumultuous social and political change, and as war came, she would have to confront crushing sadness and the consequences of forsaking much dear to her for love, before her heartbreaking death in 1948.

Bestselling and award-winning biographer Barbara Leaming draws on her unique access to firsthand accounts and candid conversations with many of the key players whose own lives were entwined with Kick’s, to transport us to a world of immense wealth, arcane rituals and rules, glamour and tragedy, that has now vanished forever.


Praise For Kick Kennedy: The Charmed Life and Tragic Death of the Favorite Kennedy Daughter…

“Candidly demystifies the life of one of the least-known Kennedys and vividly illuminates the complex world of British aristocracy.” —Booklist

Barbara Leaming is the author of three New York Times bestsellers, including her recent book Jacqueline Bouvier Kennedy Onassis. Leaming’s book Churchill Defiant received The Emery Reves Award from the International Churchill Centre. Her groundbreaking biography of America's 35th President, Jack Kennedy: The Education of a Statesman was the first to detail the lifelong influence of British history and culture and especially of Winston Churchill on JFK. Her articles have appeared in the New York Times Magazine, Vanity Fair, the Timesof London and other periodicals. She lives in Connecticut.
Loading...
or
Not Currently Available for Direct Purchase