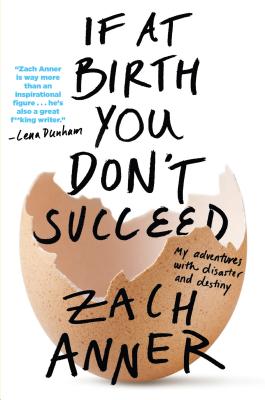 If at Birth You Don't Succeed

My Adventures with Disaster and Destiny

“Hilarious and inspiring, Anner has made a life filled with fans, love, and Internet fame—reminding us that disability is no match for dreams.”—People (Book of the Week)

“Zach Anner is way more than an inspirational figure for anyone who has ever felt impossibly different: he’s also a great f**king writer.”—Lena Dunham

Comedian Zach Anner opens his frank and devilishly funny book, If at Birth You Don't Succeed, with an admission: he botched his own birth. Two months early, underweight and under-prepared for life, he entered the world with cerebral palsy and an uncertain future. So how did this hairless mole-rat of a boy blossom into a viral internet sensation who's hosted two travel shows, impressed Oprah, driven the Mars Rover, and inspired a John Mayer song? (It wasn't "Your Body is a Wonderland.")

Zach lives by the mantra: when life gives you wheelchair, make lemonade. Whether recounting a valiant childhood attempt to woo Cindy Crawford, encounters with zealous faith healers, or the time he crapped his pants mere feet from Dr. Phil, Zach shares his fumbles with unflinching honesty and characteristic charm. By his thirtieth birthday, Zach had grown into an adult with a career in entertainment, millions of fans, a loving family, and friends who would literally carry him up mountains.

If at Birth You Don't Succeed is a hilariously irreverent and heartfelt memoir about finding your passion and your path even when it's paved with epic misadventure. This is the unlikely but not unlucky story of a man who couldn't safely open a bag of Skittles, but still became a fitness guru with fans around the world. You'll laugh, you'll cry, you'll fall in love with the Olive Garden all over again, and learn why cerebral palsy is, definitively, "the sexiest of the palsies."


Praise For If at Birth You Don't Succeed: My Adventures with Disaster and Destiny…

“Zach makes you want to be a better person, with his humor and his heart and everything he's had to deal with from the time he was born. I've never met anyone like him, and I've met a lot of people.” —Oprah Winfrey

“A laugh-a-minute read…. If At Birth You Don’t Succeed recounts his journey from being what he calls a “crappy baby” [with cerebral palsy to] the host of his own travel show and an improbable workout guru. If there was ever a book that showed the importance of laughing at yourself, this is probably it.”—MentalFloss (#1 A Best New Book for Spring)

“Zach Anner is a truly inspiring and hysterical human being with a warped sense of humor (and body). He’s also an exceptional writer and his memoir is an absolute joy.”—Rainn Wilson

“I love Zach Anner and I love his memoir. If everyone were a little more like Zach, the world may not be abetter place, but it would be funnier place, which is a great step forward.”—Reddit Co-founder Alexis Ohanian

“I think I speak for everybody when I say...I want to see more of Zach.” —John Mayer

“Comedian Zach Anner takes readers on his wild wheelchair ride through 30 years of dealing with cerebral palsy—‘the sexiest of the palsies,’ as he likes to say. He rides a Mars Rover, wins an Oprah contest to create his own travel series and discovers he’s not only datable but desirable too. Hilarious and inspiring, Anner has made a life filled with fans, love, and Internet fame—reminding us that disability is no match for dreams.”—People (Book of the Week)

“Zach Anner is way more than an inspirational figure for anyone who has ever felt impossibly different: he’s also a great f**king writer. Wise and funny, with unfailing insight into the booby trap known as the human mind, you will hang on every word as you watch him turn his considerable intellectual gifts into a life worth envying. I like that this book has no genre, and neither does this special man.”—Lena Dunham

“A characteristically hilarious and candid book about growing up with cerebral palsy, winning a reality TV contest with Oprah’s OWN channel and becoming an unlikely-yet-inspiring fitness guru and YouTube celebrity with more than 10 million views.”—What’s Trending

“Zach Anner is the living definition of ‘giving better than he’s gotten.’ Life dealt him a difficult hand but he managed to beat the house with humor, heart, and a fearless punk attitude. Required reading.”—Patton Oswalt

“Wonderful. . . Anner’s comedy is the peppy, uplifting sort you’d expect from someone who Oprah says ‘makes [her] want to be a better person,’ such as his elaborate Olive Garden metaphors for the nature of life. . . . Anner remarks wryly that being expected to act as an ambassador for the disabled ‘is a tightrope walk, which is hard on four wheels.’ Maybe so, but with this book, he makes it look easy.”—Publishers Weekly (starred review)

“Funny, empowering…An inspirational memoir with a seasoned, infectious sense of humor…[Anner’s book chronicles] his three decades of life (so far) with cerebral palsy, a permanent condition that hasn’t prevented him from living his dream as a comic, a media sensation, and a motivational speaker.”—Kirkus Reviews

“Forget the travel show, Oprah. Give him a sitcom.” —The New York Times

“He’s a unique, creative kid with a smart, edgy sense of humor.”—Arsenio Hall

Zach Anner is an award-winning comedian, show host, and public speaker. In 2011, he won his own travel show on the Oprah Winfrey Network, Rollin' With Zach. He also hosted the shows Have A Little Faith for Rainn Wilson's media company SoulPancake, and Riding Shotgun and Workout Wednesdays on his own YouTube channel, which has over eleven million hits. Zach lives in Buffalo, NY and Austin, TX, and spends most of his spare time in his underwear, thinking about how he can change the world.
Loading...
or support indie stores by buying on