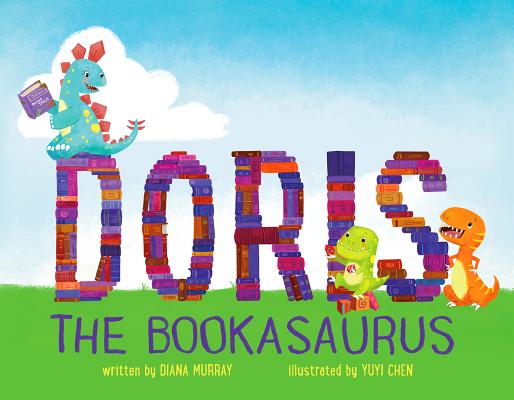 Hooray for books! They make me ROAR!

Doris the Bookasaurus thinks books are mega-dino-tastic! They make her spiky tail wiggle and her imagination soar.

Her boisterous little brothers, Max and T.J., do not agree. They want her to stop reading and play Chomp the Flag and STEGO Blocks . . . until Doris shares her pirate book aloud. Soon they’re using their imagination for on an epic adventure to Sharktooth bay.

With charming rhyming text about an adorable dinosaur family, Doris and her siblings show rambunctious readers everywhere that reading and playing go perfectly together!

Diana Murray grew up in New York City and still lives nearby with her husband, two daughters, and a spiky bearded dragon who loves listening to stories—especially about dinosaurs. Some of Diana’s picture books include Grimelda: The Very Messy Witch, Ned the Knitting Pirate, and City Shapes. Her poems have appeared in magazines including Highlights, High Five, and Spider.

Yuyi Chen loves spending most of her time drawing, painting and reading. She can also be found daydreaming or playing with her two boys, a book-a-saurus and an art-a-saurus. They live in Seattle with her, dino-loving husband and their pet rabbit. Her books include Doris the Bookasaurus and Going to Grandma's House.

Praise For Doris the Bookasaurus…