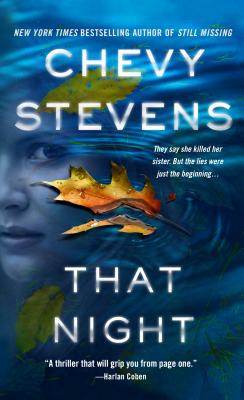 Toni Murphy had a life full of typical teenage complications: a boyfriend, Ryan, whom she adored; a strained relationship with her parents; and classmates who seemed hell-bent on making her suffer. Things weren’t easy, but Toni could never have predicted how horrific they would become until her younger sister was brutally murdered one night—and Toni and Ryan were convicted of the murder.

“An emotional rollercoaster you’ll be sorry to get off of when you finish the last page.”—Jennifer McMahon
Now thirty-four, Toni is out of prison and back in her hometown, struggling to adjust to her new reality. Meanwhile, Ryan is convinced he can find the real murderer, Toni’s own mother still doubts her innocence, and the group of women who made high school a nightmare for Toni may have darker secrets than anyone realizes. No matter how hard she tries, Toni can no longer ignore her old life…But before she can truly move on, Toni must risk everything to find out what really happened to her sister. Even if the truth is the most terrifying thing of all…
“Fast-paced and thought-provoking.” —Kimberly McCreight

Chevy Stevens is the author of Still Missing and Never Knowing. Before becoming a writer, she worked as a realtor. When she held open houses, she had a lot of time waiting by herself between potential buyers, and Stevens would spend this time scaring herself with all the things that could happen to her. The most terrifying scenario she thought up became the story behind Still Missing. Stevens grew up on a ranch on Vancouver Island, and she still calls the island home. When she’s not writing, she’s hiking with her husband and her dog in the local mountains.
or
Not Currently Available for Direct Purchase
Copyright © 2020 American Booksellers Association