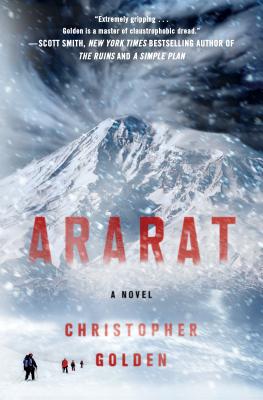 Bram Stoker Award Winner for Superior Achievement in a Novel

"An extremely gripping story, with echoes of John Carpenter’s The Thing...It’s a creepy, chilling book." —Scott Smith, New York Times bestselling author of The Ruins and A Simple Plan

"Ararat is a rollicking and horrifying adventure...as relentless as it is addictive." —Paul Tremblay, author of A Head Full of Ghosts and Disappearance at Devil's Rock

New York Times bestselling author Christopher Golden’s Ararat is a supernatural thriller about a mountain adventure that quickly turns into a horrific nightmare of biblical proportions.

Ararat is the heart-pounding tale of an adventure that goes wrong…on a biblical scale. When an earthquake reveals a secret cave hidden inside Mount Ararat in Turkey, a daring newly engaged couple are determined to be the first ones inside…and what they discover will change everything.

The cave is actually a buried ancient ship that many quickly come to believe is Noah’s Ark. When a team of scholars, archaeologists, and filmmakers make it inside the ark, they discover an elaborate coffin in its recesses. Inside the coffin they find something hideous. Shock and fear turn to horror when a massive blizzard blows in, trapping them thousands of meters up the side of a remote mountain. All they can do is pray for safety. But something wicked is listening to their prayers…and it wants to answer.


Praise For Ararat: A Novel…

"The whole is more than the sum of its parts in this exceptional supernatural thriller from bestseller Golden (Dead Ringers). An avalanche on Turkey’s legendary Mount Ararat uncovers a cave that may contain the remnants of Noah’s Ark....While the contours of the story line will be familiar to genre fans, Golden makes them feel fresh through solid prose, effective characterizations, and a willingness not to pull any plot punches." —Publishers Weekly (starred review)

"A thriller with an intellectual bent, Golden's latest effort ruminates on the nature and existence of good and evil while providing the chills and tingles fans of this prolific author have come to expect." —Kirkus Reviews

"If Ararat is a standalone novel, it is a missed opportunity to further capture an audience that is now at attention." —New York Journal of Books

“ARARAT has that horror-adventure vibe that’s like candy to me. Delicious Terror Candy! Golden seizes your heart in his hands with a tale as terrifying as it is thrilling!” —Chuck Wendig

“Golden gives a face and a name to the darkness inside us. A compelling read!”
—M.R. Carey, author of The Girl With All The Gifts and Fellside

“Let the other blurbers tell you how thrilling, how frightening, how robust this book is. They’re right to do it. But the thing that struck me deepest about Ararat is how timely this tale is for the world right now. The men and women in the book are treated as equals; in strength, in smarts, in power. Muslims are set to marry Jews. Scientists and Christians are working on the same edgy project. And yet, they all fear the same way. And they hope the same way, too. If ever we could use a story that reminds us that we’re together, a singular race, in religion and gender, that time is now. Bravo, Christopher Golden, for sewing such enormous themes into a nail-biting, exhilarating book." —Josh Malerman, author of Bird Box

"Ararat is Christopher Golden's masterpiece. A chilling thriller in the spirit of Dan Simmons's The Terror, H.P. Lovecraft's 'At The Mountains of Madness', and John Carpenter's The Thing. I loved it!" —Brian Keene, best-selling author of Pressure and The Complex

"Christopher Golden's Ararat is a rollicking and horrifying adventure that avalanches from the top of the famed Turkish mountain. A clever, original, and macabre re-imagining of one the world's oldest stories, Ararat is as relentless as it is addictive."—Paul Tremblay, author of A Head Full of Ghosts and Disappearance at Devil's Rock

"Christopher Golden has written an extremely gripping story, with echoes of John Carpenter’s The Thing. It’s not simply the icy setting of Ararat; Golden has also mastered a similar (and similarly thrilling) sense of claustrophobic dread. It’s a creepy, chilling book.” —Scott Smith, New York Times bestselling author of The Ruins and A Simple Plan

"Christopher Golden's new novel, Ararat, takes a high concept idea and delivers hours of chills. Rarely does a horror novel maintain the unrelenting momentum achieved in its early pages, but Ararat offers shock after shock, achieving an escalating suspense that becomes truly horrific by the bloody, action-packed climax. The novel will draw comparisons to Douglas Preston and Lincoln Child's early work, as well as the intrigue of a Dan Brown thriller, but Golden is a better writer than those gentlemen! Whatever you do, don't start this one late at night as you will be compelled to read until the last page. This is a great one!" —William Carl, Assistant Manager/Newsletter editor, Wellesley Books

CHRISTOPHER GOLDEN is the award-winning, bestselling author of such novels as The Myth Hunters, The Boys Are Back in Town, Strangewood, and Of Saints and Shadows. He co-wrote the lavishly illustrated novel Baltimore, or, The Steadfast Tin Soldier and the Vampire with Mike Mignola, and the comic book series featuring the same character. His novel Ararat won the 2017 Bram Stoker Award for best horror novel.
Loading...
or
Not Currently Available for Direct Purchase