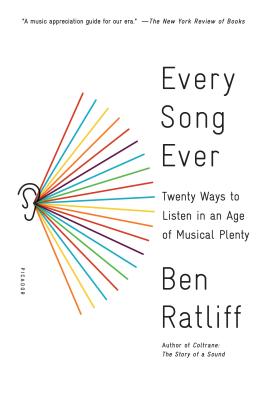 Twenty Ways to Listen in an Age of Musical Plenty

What does it mean to listen in the digital era? Today, new technologies make it possible to roam instantly and experimentally across musical languages and generations, from Detroit techno to jam bands to baroque opera—or to dive deeper into the set of tastes that we already have. Either way, we can listen to nearly anything, at any time. The possibilities in this new age of listening overturn old assumptions about what it means to properly appreciate music—to be an “educated” listener.
In Every Song Ever, the veteran New York Times music critic Ben Ratliff reimagines the very idea of music appreciation for our times. As familiar subdivisions like “rock” and “jazz” matter less and less and music’s accessible past becomes longer and broader, listeners can put aside the intentions of composers and musicians and engage music afresh, on their own terms. Ratliff isolates signal musical traits—such as repetition, speed, and virtuosity—and traces them across wildly diverse recordings to reveal unexpected connections. When we listen for slowness, for instance, we may detect surprising affinities between the drone metal of Sunn O))), the mixtape manipulations of DJ Screw, Sarah Vaughan singing “Lover Man,” and the final works of Shostakovich. And if we listen for closeness, we might notice how the tight harmonies of bluegrass vocals illuminate the virtuosic synchrony of John Coltrane’s quartet. Ratliff also goes in search of “the perfect moment”; considers what it means to hear emotion by sampling the complex sadness that powers the music of Nick Drake and Slayer; and examines the meaning of certain common behaviors, such as the impulse to document and possess the entire performance history of the Grateful Dead.
Encompassing the sounds of five continents and several centuries, Ratliff’s book is an artful work of criticism and a lesson in open-mindedness. It is a definitive field guide to our radically altered musical habitat.


Praise For Every Song Ever: Twenty Ways to Listen in an Age of Musical Plenty…

One of the Best Nonfiction Books of 2016, Paste

One of the Fifty Best Books of 2016, PopSugar

"What is remarkable about Ratliff . . . is his musical intelligence and his almost singular breadth of knowledge and sympathy for all kinds of music. He also writes very well, a quality not at all common among those who write about music in general, a famously tricky subject . . . [Ratliff's] takes on various performances, recorded or live, are often unpredictable, never pedantic or exhibitionistic, and in every case informative." —August Kleinzahler, The New York Times Book Review

"Ben Ratliff’s crystalline Every Song Ever . . . [digs] under familiar categories of description—here, from aesthetics and music criticism—to open the reader’s eyes to truer visions of our artistic situation and experience." —Mark Greif, The Atlantic

"Ratliff proposes new routes across the teeming landscape: modes of attentive listening based on concepts or musical properties . . . Close listening is Mr. Ratliff’s forte . . . [he] leans toward nontechnical terms and unshowy language, which he then nudges toward the profound or revealing . . . readers will often find themselves propelled to YouTube or Spotify to hear what he’s writing about." —Simon Reynolds, The New York Times

"The spectacle of an active mind processing a world in constant flux . . . Maybe, as Ratliff beautifully argues, the brooding aggression of metal obscures a deeper melancholy." —Hua Hsu, The New Yorker

"Incisive . . . Thanks to Ratliff's vast knowledge, what could have been a dry academic exercise is more like a trip into the world's coolest record store." —David Browne, Rolling Stone

"Smart, inspiring . . . Ratliff encourages us to listen with a mind wide open to a many kinds of music, and shows us connections between genres that we might never have noticed otherwise." —Maris Kreizman, Esquire

"Ratliff continually brings things down to Earth, thanks in part to his inclusive spirit and his masterful way of translating music through words . . . [his] exquisite language serves as a guide, revealing new ways to look at old favorites and spurring on explorations into songs unknown." —Ryan Dombal, Pitchfork

"The pleasure of reading great music criticism—which Every Song Ever is—lies in following a seasoned explorer who unearths the hidden passageways amid music’s intricate systems of interlocking tunnels. Ratliff’s musical mind is as sharp as his musical tastes are catholic, and he switches theoretical approaches as quickly as he shuffles through a century’s worth of recorded music . . . The connections that arise from Ratliff’s exploratory methodology are at turns poetic and revelatory, and most certainly are not what ends up on the average playlist." —Eric Harvey, The New Republic

"[Ratliff] reminds us, as he proceeds, of how urgently we need adventurous critics like him at a time when the notion of musical discovery has been appropriated by tech companies and sidelined in the chase for clicks . . . He wants to offer all readers a way to appreciate, even love, songs that no right-functioning recommendation engine would ever put in their earbuds . . . Ratliff celebrates the virtues of play and resistance, and knows that just as stabbing at a single note can fend off easy enchantment, so can seeking out lots of different sounds. It’s a quest that just might expand your definitions of 'great music' in directions and at a rate you never thought possible." —Spencer Kornhaber, The Atlantic

"Traversing his music collection as though he were listening again for the very first time, former New York Times music critic Ben Ratliff not only tells you what to listen to but, more importantly, how to listen to it . . . In addition to drawing out new possibilities from such familiar touchstones as repetition, quiet, improvisation and virtuosity, Ratliff riffs adroitly on the 'transmission' of extreme emotion in Sufi music, the 'linking' of composers such as Henry Threadgill with listeners like yourself, and the subtle rhythmic 'discrepancies' in the drumming of Japan's OOIOO, whose grooves 'sound the way a three-legged dog looks when running.'" —Richard Gehr, Rolling Stone

"For whatever type of listener you are, Every Song Ever includes a chapter that addresses the specific way you consume music." —Tyler R. Kane, Paste

"Every Song Ever jumps into the grand adventure of losing yourself in music, at a time when the technology boundaries have blown wide open. Ben Ratliff brilliantly makes connections between the arcane and the everyday, pointing to sounds you’ve never heard—as well as finding new pleasures in music you thought you’d already used up." —Rob Sheffield, author of Love Is a Mix Tape and Turn Around Bright Eyes

"Everyone knows we live in an age when most people can listen to anything, anytime, anywhere. Whether that’s depressing or mind-expanding depends ultimately on what kind of attention we pay. Ben Ratliff has the gifts to help us surf this wave of sonic information, not stand there mumbling at it in a grumpy-grampy way. After all, it’s presumably not going to end until the electrical grid does." —John Jeremiah Sullivan, author of Pulphead

"This is a book about one exemplary listener’s love for how many ways music can mean, set in sentences as forceful and subtle as Elvin Jones’s drumming. Slayer and Shostakovich, Ali Akbar Khan and the Allman Brothers—none of them are the same once Ben Ratliff’s ears get through with them. And your ears won’t be the same once you get through Every Song Ever." —Michael Robbins, author of Alien vs. Predator and The Second Sex

"[Ratliff] has a knack for articulating how a song works . . . [He is] like a learned record-store sage, at once a ranter and a crowd-pleaser . . . It's to his credit that he asks so many questions, offering a model of music appreciation that feels engaged and expansive. But perhaps the most galvanizing aspect of his project is that it leaves room for the DIY spirit to reemerge . . . [Every Song Ever] reignites our sense of longing for connection, allowing us to roam more consciously through the infinite channels online." —David O’Neill, Bookforum

"Ratliff breaks down the act of listening to music into 20 distinct chapters, making perceptive connections between artists ranging from Shotakovich to Ali Akbar Khan to the Jackson 5 . . . [Every Song Ever] is filled with bold statements, close listenings, and playlists, and will be immensely rewarding for those who stick with it." —Ben Segedin, Booklist

"Writing about music (not lyrics) isn’t easy, and few do it as well as Ratliff . . . I was able to cobble together most of Ratliff’s 'wasteful mastery' playlist, including songs by artists such as [Dean] Martin, Lil Wayne, Lou Reed, Fats Waller, Young Thug, and Nina Simone. It’s a hoot, and it sold me on the book’s central concept." —Devin Leonard, Bloomberg Businessweek

"In this insightful guide to contemporary music appreciation, genre limitations are off the table . . . Ratliff’s scholarship shines; there’s a lot to be said for a book on music appreciation that can draw apt parallels between DJ Screw and Bernstein’s rendition of Mahler’s ninth symphony." —Publishers Weekly

"It’s fascinating how Ratliff can bring a fresh ear to such familiar music . . . [he] makes unlikely connections that will encourage music fans to listen beyond categorical distinctions and comfort zones." —Kirkus Reviews

Ben Ratliff has been a jazz critic at The New York Times since 1996. He is the author of The Jazz Ear and The New York Times Essential Library: Jazz. His book Coltrane: The Story of a Sound was a finalist for the National Book Critics Circle Award. He lives in Manhattan with his wife and two sons.
Loading...
or support indie stores by buying on