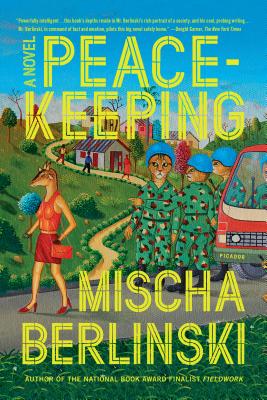 When Terry White, a former deputy sheriff and a failed politician, goes broke during the Great Recession, he takes a job training the Haitian police for the United Nations. He’s sent to the remote town of Jérémie, where there are more coffin makers than restaurants, more donkeys than cars, and the dirt roads all slope down sooner or later to the postcard sea. Terry is swept up in the town’s complex politics when he befriends an earnest, reforming American-educated judge. But when Terry falls in love with the judge's wife, the electoral drama threatens to become a disaster.

Edgy, daring, tightly plotted, and surprisingly funny, Peacekeeping confirms Berlinski's far-reaching gifts as a novelist. Like Fieldwork, it explores a part of the world that is as fascinating as it is misunderstood—and takes us into the depths of the human soul, where the thirst for power and the need for love can overrun judgment and morality.


Praise For Peacekeeping: A Novel…

"Powerfully intelligent . . . A politically sophisticated novel that plants, like pushpins, a handful of memorable characters into Haiti’s arid soil . . . [Peacekeeping's] depths reside in Mr. Berlinski’s rich portrait of a society, and his cool, probing writing about topics like sex, politics, journalism, race, class, agriculture, language and fear . . . Berlinski has a knack for writing short, sharp, surreal scenes . . . There’s a good deal of magic in the way that Mr. Berlinski, in command of fact and emotion, pilots this big novel safely home." —Dwight Garner,The New York Times

“A formidable piece of work . . . the book’s easy way with local stories and lore bespeaks the familiarity that comes with rich firsthand experience . . . [Berlinski is] a sharp collector of stories, and he has an enjoyable way of threading his narration with story: Berlinski knows how to keep leading us on.” —James Wood, The New Yorker

“Marvelous . . . Peacekeeping gallops ahead toward the horizon of tragedy, yet the novel is brightened by the author’s sense of the absurdities that saturate an enterprise like a U.N. mission and the weird, byzantine intimacies at the ground level of globalization . . . Peacekeeping, in that sense, is a welcome bearer of enlightenment and a raw reminder of the limits of empathy.” —Bob Shacochis, The Washington Post

“Mischa Berlinski’s new novel stands out for doing far more than dramatizing news headlines about the beleaguered Caribbean nation . . . Berlinski immerses the reader in an environment so richly detailed that one almost hears the buzz of insects through the pages, but the novel’s plot transcends its tropical setting, resulting in a deeper exploration of what it means to be an observer.” —Jennifer Kay, Associated Press

"Berlinski's descriptive gifts are terrific . . . The devastating 2010 earthquake naturally figures in the action and elicits Berlinski's most electric, hallucinatory prose . . . Peacekeeping makes you eager for wherever Berlinski will take his own perceptive mode of vision next." —Michael Upchurch, Chicago Tribune

"Peacekeeping is a dark, funny, powerful read . . . Readers will be glad they made the trip." —The Christian Science Monitor

“On the troubled half-island of Haiti, love, power, and poverty collide, as do a tough Florida cop, a beautiful singer, politicians, and the United Nations post-2004 peacekeeping mission . . . [Berlinski] is a kind of heir to Graham Greene and Robert Stone, both for his excellent storytelling and for the way it can reveal a bigger picture.” —Kirkus Reviews (starred review)

"Berlinski follows his National Book Award-nominated debut with a compelling tale that again immerses readers in the intrigues of an enthralling locale . . . The Haiti [Berlinski] describes is one in which there are always multiple versions of the truth, some we can bear to tell ourselves, and others we cannot." —Brendan Driscoll, Booklist (starred review)

“In tones that shift effortlessly from journalistic to atmospheric to deeply, darkly funny, Berlinski (Fieldwork) evokes a very detailed sense of place in his second novel . . . the pages are steeped in verisimilitude . . . This is a fascinating and well-plotted novel.” —Publishers Weekly

“With the eye of an anthropologist and the heart of a novelist, Berlinski vividly depicts the stark contrast of physical beauty and grinding poverty that is the essence of Haiti.” —Library Journal

“Berlinski [is] an effortless conjurer of convincing details . . . [Fieldwork is] an intoxicating journey filled with missing souls and vengeful spirits.” —Terry Hong, The Washington Post

“[Fieldwork] succeeds in evoking the quixotic appeal of both the anthropological and missionary enterprises—of documenting other cultures and of converting them.” —The New Yorker

Mischa Berlinski is the author of the novel Fieldwork, a finalist for the National Book Award. He is the recipient of a Whiting Writers’ Award and the American Academy of Arts and Letters’ Addison M. Metcalf Award.
Loading...
or support indie stores by buying on