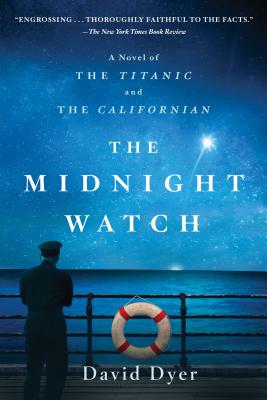 A Novel of the Titanic and the Californian

As the Titanic and her passengers sank slowly into the Atlantic Ocean after striking an iceberg late in the evening of April 14, 1912, a nearby ship looked on. Second Officer Herbert Stone, in charge of the midnight watch on the SS Californian sitting idly a few miles north, saw the distress rockets that the Titanic fired. He alerted the captain, Stanley Lord, who was sleeping in the chartroom below, but Lord did not come to the bridge. Eight rockets were fired during the dark hours of the midnight watch, and eight rockets were ignored. The next morning, the Titanic was at the bottom of the sea and more than 1,500 people were dead. When they learned of the extent of the tragedy, Lord and Stone did everything they could to hide their role in the disaster, but pursued by newspapermen, lawyers, and political leaders in America and England, their terrible secret was eventually revealed. The Midnight Watch is a fictional telling of what may have occurred that night on the SS Californian, and the resulting desperation of Officer Stone and Captain Lord in the aftermath of their inaction.

Told not only from the perspective of the SS Californian crew, but also through the eyes of a family of third-class passengers who perished in the disaster, the narrative is drawn together by Steadman, a tenacious Boston journalist who does not rest until the truth is found. David Dyer's The Midnight Watch is a powerful and dramatic debut novel--the result of many years of research in Liverpool, London, New York, and Boston, and informed by the author's own experiences as a ship's officer and a lawyer.


Praise For The Midnight Watch: A Novel of the Titanic and the Californian…

“A worthy addition to the groaning shelves of Titanic literature.” - Financial Times

“Strikingly vivid and sensitive ... Exquisitely told ... Dyer writes with simplicity and honesty ... This is a noble work about the vagaries of conscience, duty, loyalty, regret and forgiveness. I loved it!” - Liz Smith, New York Social Diary

"Dyer's debut novel turns the kaleidoscope, retelling the tale of the unsinkable ship through a new lens...Dyer rekindles the suspense and outrage of the Titanic inquiry." - Kirkus

“I completely loved The Midnight Watch; this is historical fiction at its best. David Dyer has a reporter's ear for story, a detective's nose for motive, and an artist's eye for detail. With this winning combination, he turns the sparse and contradictory record of why the nearby Californian did not go to the aid of the sinking Titanic into a gripping novel of flawed people, missed chances, and suspense.” —Charlotte Rogan, author of The Lifeboat

“A fascinating novel. David Dyer has captured all the drama and emotion of the Titanic disaster from an intriguing new perspective. Clever, gripping and utterly compelling. Historical fiction at its very best.” —Hazel Gaynor, New York Times and USA Today bestselling author of The Girl Who Came Home and A Memory of Violets

"In The Midnight Watch, David Dyer makes the story of the sinking of the Titanic brand new—he even makes you wonder what will happen. This superb novel, the disaster we think we know, comes freshly alive through its unfamiliar point of view, and David Dyer's vivid eye for the right and telling detail." –Peter Nichols, bestselling author of The Rocks

"The Midnight Watch opens fresh portals on a monumental event with all the tools of strong historical fiction: deep research, methodical recreations, and an array of memorable perspectives. Dyer proves why sometimes it takes fiction to answer history's question of "How could this happen?" A compelling read and a journey through this moment in time." –Matthew Pearl, New York Times bestselling author of The Dante Club and The Last Bookaneer

David Dyer was born and raised in Shellharbour, a small coastal town in New South Wales, Australia. He has served as an officer in the Australian merchant navy and worked as a litigation lawyer at the firm that represented the owners of the Titanic in the aftermath of the disaster. His access to countless documents and artifacts has informed and inspired his work in The Midnight Watch. He lives in central Sydney and Katoomba, a small mountain town in New South Wales.
Loading...
or
Not Currently Available for Direct Purchase