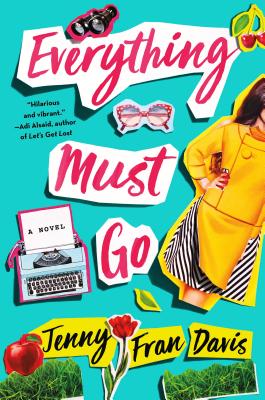 Flora Goldwasser has fallen in love. She won't admit it to anyone, but something about Elijah Huck has pulled her under. When he tells her about the hippie Quaker school he attended in the Hudson Valley called Quare Academy, where he'll be teaching next year, Flora gives up her tony upper east side prep school for a life on a farm, hoping to woo him. A fish out of water, Flora stands out like a sore thumb in her vintage suits among the tattered tunics and ripped jeans of the rest of the student body. When Elijah doesn't show up, Flora must make the most of the situation and will ultimately learn more about herself than she ever thought possible.

Told in a series of letters, emails, journal entries and various ephemera, Jenny Fran Davis's Everything Must Go lays out Flora's dramatic first year for all to see, embarrassing moments and all.


Praise For Everything Must Go: A Novel…

"A hilarious and vibrant voice that leaps from the page, delivering a nuanced and immersive reading experience." —Adi Alsaid, author of Let's Get Lost and Somewhere Over the Sun

"Flora is truly one of a kind, and her story celebrates all the awkward, brilliant confusion of being young. Warm and hilarious and genuine—I’ve never read anything quite like it." —Amy Zhang, author of This is Where The World Ends and Falling Into Place

“It’s magic to find such levels of bracing intelligence and vulnerable warmth in one book. Hilarious, incisive, and light on its feet, Everything Must Go is a treat for anyone who’s ever gone to great lengths to belong.” —Eliot Schrefer, author of National Book Award Finalists Endangered and Threatened

"Clever, funny, self-deprecating (in the best of ways), and decidedly, fashionably feminist, Flora is a heroine for girls with a longing for romance, an affinity for the intellectual and the old-fashioned, and a particular flair for the dramatic. Flora is for all of us, in other words! And Davis, her creator, absolutely hilarious. Not to be missed!" —Donna Freitas, author of Unplugged and The Body Market

Jenny Fran Davis was born in Manhattan and spent four months avoiding (but later embracing) millet mountains in a peace- and justice-focused Quaker community in northern California. Fond of big dogs, doo-wop, and Judy Blume, she attended the Chapin School and is currently an undergraduate at Wesleyan University. Everything Must Go is her debut novel.
Loading...
or
Not Currently Available for Direct Purchase