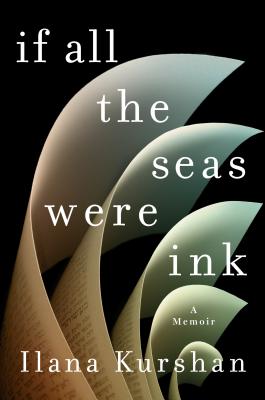 If All the Seas Were Ink

The Wall Street Journal: "There is humor and heartbreak in these pages...Ms. Kurshan immerses herself in the demands of daily Talmud study and allows the words of ancient scholars to transform the patterns of her own life."

The Jerusalem Post: "A beautiful and inspiring book. Both religious and secular readers will find themselves immensely moved by [Kurshan's] personal story.”

American Jewish World: “So engrossing I hardly could put it down.”

At the age of twenty-seven, alone in Jerusalem in the wake of a painful divorce,Ilana Kurshan joined the world’s largest book club, learning daf yomi, Hebrew for“daily page” of the Talmud, a book of rabbinic teachings spanning about six hundredyears. Her story is a tale of heartache and humor, of love and loss, of marriageand motherhood, and of learning to put one foot in front of the other by turningpage after page. Kurshan takes us on a deeply accessible and personal guided tourof the Talmud. For people of the book—both Jewish and non-Jewish—If All theSeas Were Ink is a celebration of learning, through literature, how to fall in loveonce again.


Praise For If All the Seas Were Ink: A Memoir…

"I have now read the book three times ... If All The Seas Were Ink got me through a difficult year." — Adam Lenson, Medium

“It takes a brilliant intellect to study the Talmud the way Kurshandoes...If All the Seas Were Ink provides a true and clear exampleof text study that benefits the soul as well as the mind.”—The Christian Century

"An elegant, engaging and daunting tale of the many paths of human passion...This delightful and deep story of life made me feel as if Kurshan and I had several leisurely dinners together, or had met regularly at a cafe." —Rochelle L. Millen, Hadassah Magazine

“Kurshan… writes beautifully about the complexities of love, loss, shame, growth and the things that matter. .. For her, the ancient pages are alive with ideas, and in them she finds both light and a new lightness of spirit.” —Sandee Brawarsky, The Jewish Week

"Valuable for its lessons, whether one is religious or not." —Southern Jewish Life

“[Kurshan] is a gorgeous writer, emotionally honest and perceptive…She has written a beautiful and inspiring book. Both religious and secular readers will find themselves immensely moved by her personal story and the raw courage of the journey she has undertaken.” —Elaine Margolin, The Jerusalem Post

"From the moment I picked up If All the Seas Were Ink, I was not able to put it down...Highly recommended... No background in Talmud is needed to appreciate Kurshan’s intriguing story. When you turn the last page, you will walk away feeling talmudically enriched and already hoping for a sequel." —Rabbi Judith Hauptman, Lilith Magazine

"There is humor and heartbreak in these pages...Ms. Kurshan immerses herself in the demands of daily Talmud study and allows the words of ancient scholars to transform the patterns of her own life." —The Wall Street Journal

“Lyrical and erudite. … Kurshan’s memoir gives us insightful contemporary readings of talmudic passages while demonstrating how life can accrue added richness when set against the backdrop of the Talmud.” —Sarah Rindner, Jewish Review of Books

"[Kurshan] became one with the Talmudic lessons, seeing them everywhere and applying them to being a Jew and a mother in the modern era." —The JC

“Clever and witty… Kurshan is a fabulous writer; her clarity and simplicity propel you along almost unaware that you’re reading…So engrossing I hardly could put it down.” —Neal Gendler, The American Jewish World

"Delightful...The most enjoyable feature of the book is the brilliant and creative integration of the daily Talmudic folio Kurshan studies with experiences of her life." —Jeffrey L. Rubenstein, The Lehrhaus

"What makes Kurshan’s memoir unique is her explication of the text...this is an introduction by someone who is trying to live both with and in the text." —Beth Kissileff, Tablet Magazine

"The splendidly written book is made all the more compelling by Kurshan’s willingness to share her vulnerabilities. .. This book was a great surprise to me, and one of my favorites of the year." —Howard Freedman, The Jewish News of Northern California

"Kurshan committed herself to the Daf Yomi...she reports on how this daily discipline brought humor and wisdom and insight into her life." —Rabbi Jack Riemer

"If All The Seas Were Ink is a book about passion of many varieties—romantic passion, religious passion, aesthetic passion, but above all else, passion for knowledge. The word scholarship is too tame to do justice to Kurshan’s wild passion for the written word, whether the word is found on a page of Talmud or in a sonnet of Wordsworth. The blend of her loves makes for a rich and fascinating life, which makes for a rich and fascinating book." —Rebecca Newberger Goldstein, author of Plato at the Googleplex: Why Philosophy Won't Go Away

"If All the Seas Were Ink is such a moving memoir. Kurshan's portrait of everyday life in Jerusalem enriches her recounting of connecting to centuries of intellectual curiosity and conversing with bygone generations. How wonderful to explore this great volume with such a sensitive and thoughtful guide." —Susan Isaacs, author of Long Time No See

"In this deeply personal and often hilarious story, Kurshan shows us how the Talmud’s thousands of strange and demanding pages become a conversation about how best to live one's life in an imperfect world. Kurshan awakens us to our imperfect world’s hidden magnificence—and to the power of literature to inspire human resilience. A stunning, gorgeous memoir." —Dara Horn, author of The World to Come

"With this memoir, Ilana Kurshan enters the exclusive club of daf yomi learners, a club that was, for generations, restricted to men. Hers is a stunningly original voice in the world of Torah and the world of literature. Go run and read this book." —Ruth Calderon, author of A Bride for One Night

"When a woman as incredibly well-read as Ilana Kurshan commits herself to studying the Talmud daily for seven-and-a-half years, the results are mind-expanding, both for her and for readers of If All the Seas Were Ink. An utterly original book." —Rabbi Joseph Telushkin, author of Jewish Literacy, Rebbe, and A Code of Jewish Ethics

"An intimate and eloquent portrait of a young woman’s passionate loves and fears… Kurshan writes as a woman of (as she puts it) ‘Dickensonian sensibilities:’ clinging to her privacy while exposing her vulnerability, seeking the resonances between her mind, soul and body, and revealing an acutely sensitive intelligence, a wry self-awareness, and an active sense of the absurd." —Avivah Zornberg, author of The Murmuring Deep

"Kurshan's beautiful prose weaves the trials and tribulations of her personal seven-year journey together with the Talmud texts she's learning. I applaud, and am awed, by this moving and remarkable memoir." —Maggie Anton, author of Rashi's Daughters

Ilana Kurshan is a graduate of Harvard and Cambridge. She has worked in literary publishing both in New York and in Jerusalem, as a translator and foreign rights agent, and as the books editor of Lilith magazine. Her writing has appeared in Tablet, Lilith, Hadassah, The Forward, Kveller, The World Jewish Digest, Nashim, and The Jewish Week. She lives in Jerusalem with her husband and four children. Ilana is the author of Why Is This Night Different From All Other Nights? and If All The Seas Were Ink.
Loading...
or
Not Currently Available for Direct Purchase