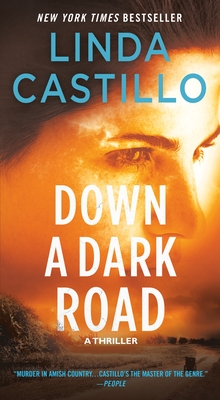 Down a Dark Road

A dark memory from the past has come home to find revengeâ€”or redemptionâ€”in Down a Dark Road from New York Times bestselling author Linda Castillo.

"Murder in Amish country has a certain added frisson, and Castilloâ€™s the master of the genre.â€ â€”People magazine

Two years ago, â€œfallenâ€ Amish man Joseph King was convicted of murdering his wife and sentenced to life in prison. Now King has escaped from prison. . .and is headed for Painters Mill. For Chief of Police Kate Burkholder, this case is personal. As a thirteen-year-old Amish girl, Kate had worshiped the ground King walked on. Still, Kate never could have imagined the nightmare scenario that becomes reality when King shows up to take his five children hostageâ€”armed, desperate, and with nothing left to lose.
Fearing for the childrenâ€™s safety, Kate agrees to meet King face to face. His only request: to help him prove his innocence. Though skeptical, she agreesâ€”only to discover that the facts and the evidence of Kingâ€™s case donâ€™t align, and that someone may have set him up to take the fall for murder. Someone who wants to keep a terrible secret buried foreverâ€¦and is willing to kill again.

â€œCastillo weaves the particularities of the Amish mindset into a complex mystery that will leave you crying with pity or seething with rage.â€ â€”Kirkus Reviews (starred)

LINDA CASTILLO is the New York Times bestselling author of the Kate Burkholder novels, including Sworn to Silence, which was adapted into a Lifetime Original Movie starring Neve Campbell as Kate Burkholder. She has received numerous industry awards including a nomination by the International Thriller Writers for Best Hardcover, the Daphne du Maurier Award of Excellence, and a nomination for the RITA. In addition to writing, Castilloâ€™s other passion is horses. She lives in Texas with her husband.
Loading...
or support indie stores by buying on
(This book is on backorder)