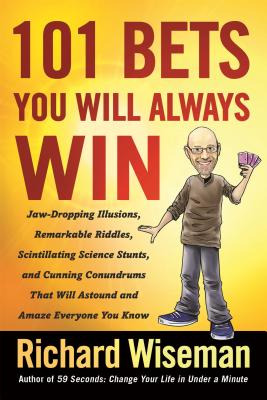 101 Bets You Will Always Win

Jaw-Dropping Illusions, Remarkable Riddles, Scintillating Science Stunts, and Cunning Conundrums That Will Astound and Amaze Everyone You Know

YouTube sensation, psychologist Richard Wiseman, shows you how to astound your friends with 101 Bets You Will Always Win

Everyone loves a winner. Imagine being able to challenge anyone with seemingly impossible bets, safe in the knowledge that you will always win. Imagine no more. Richard Wiseman is a psychologist who has traveled the globe in search of the world's greatest bets and in "101 Bets You Will Always Win" he shows you how to use science, logic and a healthy dose of trickery always to be on the winning side of every bet you make. Using coins, dice, matchsticks and ordinary objects, you'll discover, among many other things,

In explaining the bets, Wiseman also explains the science behind them making what at first seems mystifying as natural as the laws of gravity. Let YouTube sensation Richard Wiseman turn you into one of those smart people who can say "I'll bet I can..." and know that you'll never lose.


Praise For 101 Bets You Will Always Win: Jaw-Dropping Illusions, Remarkable Riddles, Scintillating Science Stunts, and Cunning Conundrums That Will Astound and Amaze Everyone You Know…

“'The most-followed psychologist on Twitter' re-examines the process of creating personal change and growth… By flipping current psychology theories upside down and putting motion before emotion, one can have better relationships, fight depression and anxiety, lose weight and stop smoking (or curb other addictive behaviors), grow more confident, and slow down the effects of aging….[An] intriguing new slant to personal transformation.” - Kirkus on The As If Principle

"Drawing from such well-known trials and tests as the Zimbardo prison study and the Stanislavski acting method, as well as historical and pop culture figures like Frederick Douglass and Joan Baez . . . A convincing argument for the power of action." - Publishers Weekly on The As If Principle

"Wiseman's The As If Principle explains how to instantly take control of your emotions. Whether it's quitting a bad habit, persevering through a difficult task or achieving your dream self, you can make it happen." - AskMen.com on The As If Principle

RICHARD WISEMAN is based at the University of Hertfordshire in the United Kingdom and has gained an international reputation for research into offbeat areas of psychology, including deception, humor, and luck. He is the author of The Luck Factor, Quirkology, and numerous other books. A passionate advocate for science, Wiseman is well-known for his media appearances, high-profile talks, live demonstrations, and mass-participation studies. Wiseman also regularly acts as a creative consultant for print, broadcast, and new media.He has his own YouTube channel called Quirkology.
Loading...
or
Not Currently Available for Direct Purchase