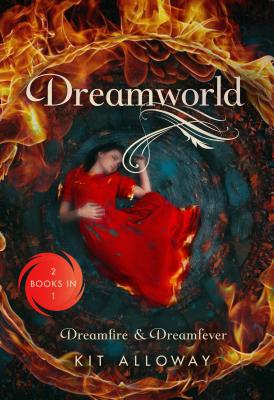 Two Books in One: Dreamfire & Dreamfever (The Dream Walker Trilogy)

Kit Alloway's Dreamfire and Dreamfever are now available in paperback for the first time, together in one stunning package. Discover the exciting and turbulent world of the Dreamwalker in this convenient bind-up.

Unlike most 17-year-olds, Joshlyn Weaver has a sacred duty. She's the celebrated daughter of the dreamwalkers, a secret society whose members enter the Dream universe we all share and battle nightmares. If they fail, the emotional turmoil in the Dream could boil over and release nightmares into the World.

Despite Josh's reputation as a dream walking prodigy, she's haunted by her mistakes. A lapse in judgment and the death of someone she loved have shaken her confidence. Now she's been assigned an apprentice, a boy whose steady gaze sees right through her, and she's almost as afraid of getting close to him as she is of getting him killed.

But when strangers with impossible powers begin appearing in the Dream, it isn't just Will that Josh has to protect--it's the whole World.


Praise For Dreamworld: Two Books in One: Dreamfire & Dreamfever (The Dream Walker Trilogy)…

“The nightmare vignettes are rivetingly chilling. A dark and exciting paranormal adventure that will keep patient genre fans up late.” —Kirkus Reviews on Dreamfire

“A suspenseful riddle full of intrigue.” —Publishers Weekly on Dreamfire

KIT ALLOWAY writes primarily for young adults, having always had an affection for teenagers.  In addition to writing, she plays various musical instruments, decorates cakes, mixes essential oils, and studies East European languages.  She lives in Louisville, KY with her family and four very tiny dogs. Dreamfire is her debut novel.
Loading...
or support indie stores by buying on