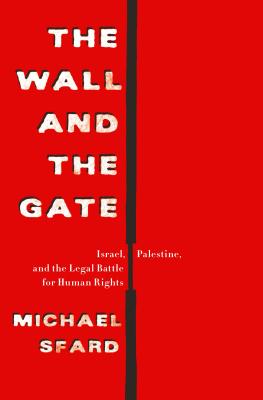 The Wall and the Gate

Israel, Palestine, and the Legal Battle for Human Rights

From renowned human rights lawyer Michael Sfard, an unprecedented exploration of the struggle for human rights in Israel's courts

A farmer from a village in the occupied West Bank, cut off from his olive groves by the construction of Israel’s controversial separation wall, asked Israeli human rights lawyer Michael Sfard to petition the courts to allow a gate to be built in the wall. While the gate would provide immediate relief for the farmer, would it not also confer legitimacy on the wall and on the court that deems it legal? The defense of human rights is often marked by such ethical dilemmas, which are especially acute in Israel, where lawyers have for decades sought redress for the abuse of Palestinian rights in the country’s High Court—that is, in the court of the abuser.

In The Wall and the Gate, Michael Sfard chronicles this struggle—a story that has never before been fully told— and in the process engages the core principles of human rights legal ethics. Sfard recounts the unfolding of key cases and issues, ranging from confiscation of land, deportations, the creation of settlements, punitive home demolitions, torture, and targeted killings—all actions considered violations of international law. In the process, he lays bare the reality of the occupation and the lives of the people who must contend with that reality. He also exposes the surreal legal structures that have been erected to put a stamp of lawfulness on an extensive program of dispossession. Finally, he weighs the success of the legal effort, reaching conclusions that are no less paradoxical than the fight itself.

Writing with emotional force, vivid storytelling, and penetrating analysis, Michael Sfard offers a radically new perspective on a much-covered conflict and a subtle, painful reckoning with the moral ambiguities inherent in the pursuit of justice. The Wall and the Gate is a signal contribution to everyone concerned with the Israeli-Palestinian conflict and human rights everywhere.


Praise For The Wall and the Gate: Israel, Palestine, and the Legal Battle for Human Rights…

“Sfard stands securely among the stars of the civil rights and human rights committed lawyers/scholars of his generation.... The energy and passion that inform his superb book exist side by side with meticulous detail, informed by a historian’s love for tracing attitudes, themes, and politics as they have evolved over a half century.”
—Henry J. Steiner, The Times of Israel

“Engaging, highly informative, and thought-provoking, this is a book that only an activist, scholar, and top human rights lawyer like Michael Sfard could have written. It should be required reading for anyone wanting to understand the struggle for human rights in occupied Palestine.”
—Raja Shehadeh, author of Where the Line Is Drawn: A Tale of Crossings, Friendships, and Fifty Years of Occupation in Israel-Palestine

“At a time of surging ethnic nationalism, the legal struggle to prevent injustice against Palestinians is especially difficult. Michael Sfard is at the forefront of this struggle and his account is both a compelling story and an important contribution to understanding how battles for human rights are fought in the courts.”
—Aryeh Neier, former executive director of the ACLU

“Comprehensive, detailed, reflective, troubling, thought-provoking and rooted in universal human principles, The Wall and the Gate is the definitive study of the struggle for Palestinian human rights under occupation—a must read.”
—Naomi Chazan, former member of Knesset and president, the New Israel Fund

“The Wall and the Gate grapples candidly with the dilemma of working within Israel’s courts to achieve some modicum of justice for the occupation’s victims while knowing that doing so reinforces a system of injustice. It is essential reading.”
—Kenneth Roth, executive director, Human Rights Watch

“This extraordinary book tells the story of the heroic battle waged in Israeli courts, first and foremost for the rights of Palestinians, yet also for the souls of Israelis and what remains of the humanistic character of Zionism. Michael Sfard is one of the great heroes of this fight, and his book is as tantalizing as it is morally urgent.”
—Zeev Sternhell, Leon Blum Professor of political science at Hebrew University and author of The Anti-Enlightenment Tradition

“Providing an intimate history of the occupation, as well as an honest reckoning with the dilemmas inherent to the legal quest for justice, The Wall and the Gate will serve as an inspiration for all who labor in the field of human rights and seek to use the law to confront oppression.”
—John Dugard, judge ad hoc, International Court of Justice; former UN special rapporteur on Human Rights in the Occupied Palestinian Territory

“Equal parts history, legal scholarship, case studies, and disquisition into the moral contradictions inherent in using courts to challenge human rights abuses, The Wall and the Gate is above all an unflinching indictment of Israel’s occupation and the violation of rights that it represents.”
—Lara Friedman, president, Foundation for Middle East Peace

“Michael Sfard has the courage to confront his own countrymen in the legal battle against Israel’s occupation and the intellectual honesty to question whether the fight has at times done more harm than good.”
—Dan Ephron, author of Killing a King: The Assassination of Yitzhak Rabin and the Remaking of Israel

Michael Sfard, Israel’s leading human rights lawyer, was educated at the Hebrew University in Jerusalem and University College, London. A former conscientious objector, he received the Emil Grunzweig Human Rights Award and an Open Society Fellowship. Sfard has also taught human rights law and his writing on the subject has appeared in New York Times, Haaretz, The Independent, and Foreign Policy. He lives in Tel Aviv.
Loading...
or
Not Currently Available for Direct Purchase