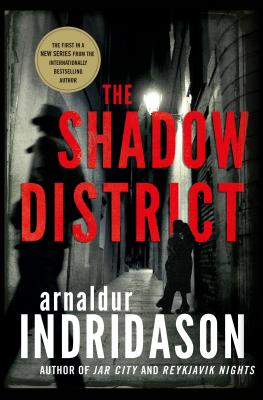 A Thriller (The Flovent and Thorson Thrillers #1)

A deeply compassionate story of old crimes and their consequences, The Shadow District is the first in a thrilling new series by internationally bestselling author Arnaldur Indridason.

THE PAST
In wartime Reykjavik, Iceland, a young woman is found strangled in 'the shadow district', a rough and dangerous area of the city. An Icelandic detective and a member of the American military police are on the trail of a brutal killer.

THE PRESENT
A 90-year-old man is discovered dead on his bed, smothered with his own pillow. Konrad, a former detective now bored with retirement, finds newspaper cuttings reporting the WWII shadow district murder in the dead man’s home. It’s a crime that Konrad remembers, having grown up in the same neighborhood.

A MISSING LINK
Why, after all this time, would an old crime resurface? Did the police arrest the wrong man? Will Konrad's link to the past help him solve the case and finally lay the ghosts of WWII Reykjavik to rest?


Praise For The Shadow District: A Thriller (The Flovent and Thorson Thrillers #1)…

Praise for The Shadow District:

"There's always a solid sense of history in Arnaldur Indridason's moody Icelandic mysteries. With his usual delicate touch, Indridason weaves in just enough folklore to remind us that a nation can never live down its legends."—New York Times Book Review

"The intertwining stories will keep readers engaged until the book’s unexpected ending; also absorbing are Indridason’s characters, who make wartime and today’s Iceland come to life. The dialogue rings true and impart a forthright yet gentle tone that matches the harsh but dreamy landscape, which is lovingly described."—Booklist

"With minimalist prose, Indridason skillfully weaves the present-day murder with the past in this classic whodunit that ends with a satisfying and logical resolution."—Kirkus Reviews

"Outstanding series launch...Indridason provides a great window into Icelandic culture as he explores his recurring themes of greed and abuse of power."—Publishers Weekly (starred)

"A welcome addition from a master of the genre."—Library Journal (starred)

"Terrific...the deftly spun Shadow District leaves us eager to read the next installment in the series."—Chicago Tribune

"The steady progression of unearthing clues and witnesses to the mysteries is so riveting...readers will not find the story lacking in any way."—Mystery Scene

"The Shadow District is a seductively menacing thriller by Arnaldur Indridason. It's a thrilling and emotionally devastating novel that you will try to finish in one sitting."—The Washington Book Review

"The Shadow District is [Arnaldur's] first in a new series, and it’s a terrific beginning. As always the author’s characters and plot are believable and engrossing, and the glimpses into Icelandic history are an added plus."—Marilyn's Mystery Reads

"Indridason is an international literary phenom. I can't wait for the next." —Harlan Coben

"Puts Iceland on the map as a major destination for enthusiasts of Nordic crime fiction." —Marilyn Stasio, The New York Times Book Review

"Iceland's Indridason is a master of the hard-edged realist psychological thriller, anchoring his stories in the dark side of contemporary Icelandic life." —Men's Journal

"Classic mystery fiction, both compassionate and thrilling. Indridason is one of the brightest stars in the genre's dark skies." —John Connolly

“Like his protagonist, Indridason is calm, methodical and unassuming. With Reykjavik's nights as a backdrop, what starts out as a modest tale of an unfortunate death develops into a deeply involving tale of chronic neglect, drug addiction, spousal abuse and the unsavory nature of fate.” —Chicago Tribune, Crime Fiction Roundup

“Indridason and Stieg Larsson have produced two of the best crime novels of the year.” —The Independent(UK)

“Every one of these writers is good [Hakan Nesser, Kjell Eriksson, Karin Fossum], but in my book, Arnaldur Indridason is even better.” —Joe Queenan, Los Angeles Times