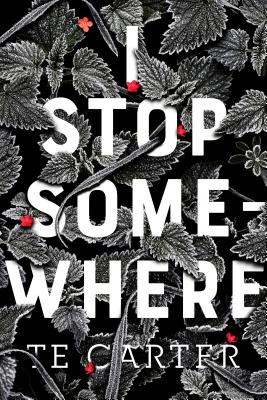 Tormented throughout middle school, Ellie begins her freshman year with a new look: she doesn’t need to be popular; she just needs to blend in with the wallpaper.

But when the unthinkable happens, Ellie finds herself trapped after a brutal assault. She wasn't the first victim, and now she watches it happen again and again. She tries to hold on to her happier memories in order to get past the cold days, waiting for someone to find her.

The problem is, no one searches for a girl they never noticed in the first place.

TE Carter’s stirring and visceral debut not only discusses and dismantles rape culture, but it also reminds us what it is to be human.


Praise For I Stop Somewhere…

I Stop Somewhere is an achingly beautiful novel that delves into the issues surrounding rape and the treatment of sexual assault victims. . . I Stop Somewhere handles a sensitive topic with grace and beauty. The lyrical prose gently leads readers to an understanding of Ellie’s situation without harsh or graphic detail."—VOYA, starred review

"In a breathy, lyrical voice, Carter tells an all-too-familiar story about violence, rape culture, and the damaging shortcomings of the justice system in response to sexual assault. Carter builds a deeply evocative setting—a town besieged by failing industry and a vampiric real-estate developer—which is a fitting background for a story about a community turning its back on its vulnerable residents. . . the pointed conversation about rape culture and violence remains timely and important. Hand to readers who loved Laurie Halse Anderson’s Speak (1999)."—Booklist

"This is heartbreakingly realistic in illustrating the ways society fails girls in Ellie’s shoes. The author is also very skilled at conveying the brutality of the attacks on Ellie and the other girls without gratuitous or sensationalizing detail."—School Library Journal

TE Carter was born in New England and has lived in New England for pretty much her entire life. Throughout her career, she’s done a lot of things, although her passion has always been writing. When she’s not writing, she can generally be found reading classic literature, obsessing over Game of Thrones (she’s one hundred percent Team Lannister), playing Xbox, organizing her comic collection, or binge watching baking competitions. She continues to live in New England with her husband and their two cats. I Stop Somewhere is her first novel.
Loading...
or
Not Currently Available for Direct Purchase