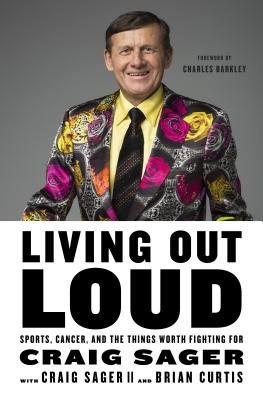 Sports, Cancer, and the Things Worth Fighting For

A moving and inspiring memoir from the beloved sports broadcaster Craig Sager on his battle with leukemia and how he maintained a positive outlook on life in face of incredible circumstances.

“Time is something that cannot be bought, it cannot be wagered with God, and it is not in endless supply. Time is simply how you live your life.” —Craig Sager

Thanks to an eccentric wardrobe filled with brightly colored suits and a love of sports that knows no bounds, Craig Sager is one of the most beloved and recognizable broadcasters on television. So when the sports world learned that he was diagnosed with acute myeloid leukemia (AML) there was an outpouring of love and support from everyone who was inspired by his colorful life and his fearless decision to continue doing the job he loved—despite being told that he would have only three-to-six months to live. Sager has undergone three stem cell transplants—with his son as the donor for two of them—and more than twenty chemotherapy cycles since his diagnosis.

In Living Out Loud, Craig Sager shares incredible stories from his remarkable career and chronicles his heroic battle. Whether he’s sprinting across Wrigley Field mid-game as a college student with cops in pursuit, chasing down Hank Aaron on the field for an interview after Aaron broke Babe Ruth’s home run record, running with the bulls in Pamplona, or hunkering down to face the daunting physical challenges of fighting leukemia, Craig Sager is always ready to defy expectations, embrace life, and live it to the fullest.

Including a foreword by Charles Barkley and with unique insight from his son Craig Sager II, this entertaining, honest, and introspective account of a life lived in sports reveals the enduring lessons Sager has learned throughout his career and reminds you that no matter what life throws at you, to always look at the bright side.


Praise For Living Out Loud: Sports, Cancer, and the Things Worth Fighting For…

"Living Out Loud allows people across the country to be inspired by Craig Sager's extraordinary battle." —Marv Albert, sportscaster

CRAIG SAGER (1951-2016) was an Emmy Award-winning broadcaster for Turner Sports who became synonymous with the NBA over his more than four decades on air. He has also reported on MLB, the NFL, college football, twelve Olympic Games, the PGA Tour, Wimbledon, the World Cup, the Goodwill Games, and horse racing for TNT, CNN, CBS, and NBC. He chronicled his life in Living Out Loud: Sports, Cancer, and the Things Worth Fighting For.

CRAIG SAGER II is a managing editor and sportswriter based in Atlanta covering high school sports as well as working with the Atlanta Journal Constitution and the Atlanta Falcons. Sager graduated from the University of Georgia where he participated as a walk-on football player.