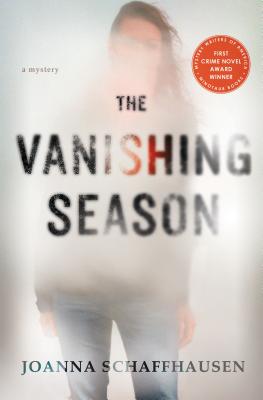 Winner of the Minotaur Books/Mystery Writers of America First Crime Novel Competition, Joanna Schaffhausen’s accomplished debut The Vanishing Season will grip readers from the opening page to the stunning conclusion.

Ellery Hathaway knows a thing or two about serial killers, but not through her police training. She's an officer in sleepy Woodbury, MA, where a bicycle theft still makes the newspapers. No one there knows she was once victim number seventeen in the grisly story of serial killer Francis Michael Coben. The only one who lived.

When three people disappear from her town in three years—all around her birthday—Ellery fears someone knows her secret. Someone very dangerous. Her superiors dismiss her concerns, but Ellery knows the vanishing season is coming and anyone could be next. She contacts the one man she knows will believe her: the FBI agent who saved her from a killer all those years ago.

Agent Reed Markham made his name and fame on the back of the Coben case, but his fortunes have since turned. His marriage is in shambles, his bosses think he's washed up, and worst of all, he blew a major investigation. When Ellery calls him, he can’t help but wonder: sure, he rescued her, but was she ever truly saved? His greatest triumph is Ellery’s waking nightmare, and now both of them are about to be sucked into the past, back to the case that made them...with a killer who can't let go.


Praise For The Vanishing Season: A Mystery (Ellery Hathaway #1)…

"[A] stunning debut. Schaffhausen devises a clever storyline, complete with an ingenious pattern, a skillful piece of misdirection and a conclusion that simultaneously troubles and satisfies." —The Richmond-Times Dispatch

"A gripping and powerful read. It is what we call an edge-of-your-seat, rollercoaster of a thriller. You will not be able to put it down before you finish it."—The Washington Book Review

"Poignant and gripping...Schaffhausen keeps the fresh plot of The Vanishing Season churning without resorting to cliches. Believable and flawed characters enhance the realistic twists, down to the denouement. Ellery should be able to support a long-running series.—The Philadelphia Inquirer

“The Vanishing Season won the Minotaur Books/Mystery Writers of America First Novel Competition. Given the precise prose, the suspenseful plot and the emotionally tortured characters, to say nothing of an irresistible basset hound named Bump, it’s easy to see why.”—Associated Press

“Crime fanatics and mystery lovers will love this story. Schaffhausen really nails the genre and the character development beautifully.”—Huffington Post

"Schaffhausen’s debut is a fantastic, convoluted thriller that will have her audience on the edge of their seats, taking notes to catch every crumb of a clue. Ellery and Reed, her protagonists, are complex yet brilliantly believable, competent yet very imperfectly human.The villain is both evil and cunning. The storytelling is exceptional and the dialogue is powerful. This chilling tale will have readers guessing till the end! This one is sure to end upon the bestseller list." —RT Book Reviews

“Joanna Schaffhausen’s The Vanishing Season is a gripping debut with a plot twist readers won’t see coming. The main character, Ellery Hathaway, is a survivor whose grace, intelligence, and grit reminded me of Clarice Starling.”—HALLIE EPHRON, author of Night Night, Sleep Tight

"The Vanishing Season introduces small-town police detective Ellery Hathaway, a former child victim of an infamous sadistic psychopath. While attempting to hide the scars of past trauma, Ellery must hunt a terrifying serial killer whose methods eerily echo her former abuser’s. Is she next on his list? Schaffhausen does equal justice to Ellery’s inner and outer struggles as she keeps the plot twists coming in this gripping, compulsively readable debut. Be prepared to lose sleep."—ELISABETH ELO, author of North of Boston

"A twisted story with an unforgettable protagonist and a drop-book-in-lap, sneaky twist that will make you say WOW!"—SHANNON KIRK, author of Method 15/33

Joanna Schaffhausen wields a mean scalpel, skills developed in her years studying neuroscience. She has a doctorate in psychology, which reflects her long-standing interest in the brain—how it develops and the many ways it can go wrong. Previously, she worked for ABC News, writing for programs such as World News Tonight, Good Morning America, and 20/20. She lives in the Boston area with her husband and daughter. The Vanishing Season is her first novel.
Loading...
or
Not Currently Available for Direct Purchase