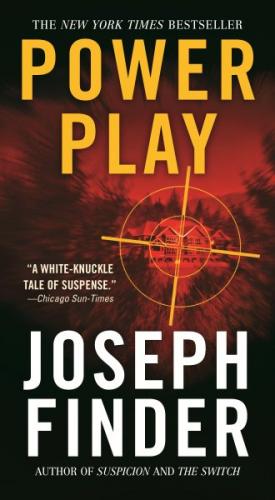 An off-site corporate event gone disastrously wrong. The largest ransom in history. The price-tag: dead or alive. Now, in Joseph Finder's explosive thriller Power Play, it's up to Jake Landry-a modest, steady guy with a dark, hidden past-to save them all...

It was the perfect retreat for a troubled company. No cell phones. No BlackBerrys. No cars. Just a deluxe lodge surrounded by thousands of miles of wilderness and a desolate seacoast.

Jake Landry is a junior executive at the Hammond Aerospace Corporation, a steady, modest, and taciturn guy with a gift for keeping his head down-and a turbulent past he prays he's put behind him. Ordered to fill in for his boss at the annual offsite, he's out of his element. He's uncomfortable with the lavish accommodations and especially with the arrogant, swaggering men who run the company and the only person he knows there is the new special assistant to the CEO-who happens to be Jake's ex.

Then a band of hunters, apparently lost in the woods, crash the opening-night festivities. Soon the execs of a billion-dollar company, cut off from the rest of the world, find themselves at the mercy of a group of men with guns...and a cunning plan to take Hammond Aerospace for all it's worth.

But the hostage takers aren't who they appear to be and neither is Jake Landry. The high flyers hadn't wanted Jake to come along. Now he's the only one who can save them.


Praise For Power Play: A Novel…

“SUSPENSE AT ITS FINEST. ..MOVES LIKE A BULLET OUT OF A GUN.” —LEE CHILD

“GRABS YOU BY THE THROAT AND DOESN'T LET GO.” —Harlan Coben

“A NAIL-BITER OF A READ.” —LIBRARY JOURNAL

“I DARE YOU TO READ THE FIRST PAGE. YOU WON'T BE ABLE TO STOP.” —TESS GERRITSEN