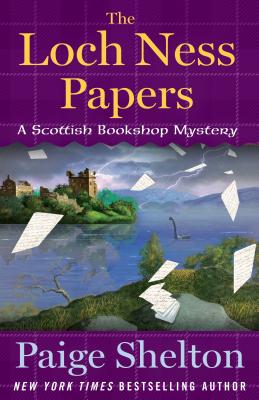 Bookseller Delaney Nichols befriends a Loch Ness monster enthusiast; when he stands accused of murder she'll do whatever it takes to learn who the killer is—and whether Nessie herself is really lurking in the Scottish waters.

Delaney Nichols is delighted with her life in Edinburgh, working at The Cracked Spine—a shop that specializes in hard-to-find books and artifacts. With a job she loves, and her fast approaching marriage to devastatingly handsome Scottish pub-owner Tom Shannon, Delaney's life could be straight out of a fairy tale—at least it would be, if the pastor meant to perform the wedding ceremony hadn't recently passed away. Outside the church where Delaney is searching for another reverend, she stumbles across Norval Fraser: an elderly man obsessed with the Loch Ness monster. Always attracted to the interesting and unusual, Delaney befriends Norval. But when his nephew is found dead, the police decide Norval's obsession has moved from monsters to murder.

With a wedding to plan, her family arriving soon from Kansas, and the arrival of an over-the-top Texan with a wildly valuable book, Delaney's plate is full to bursting, but she can't abandon her new friend. Determined to help Norval, she sets out to learn the truth. The Loch Ness buries its secrets deeply, but Delaney is determined to dig them up—whether Nessie likes it or not.

Set in Edinburgh, Scotland, The Loch Ness Papers is the fourth in the Scottish Bookshop series by Paige Shelton.