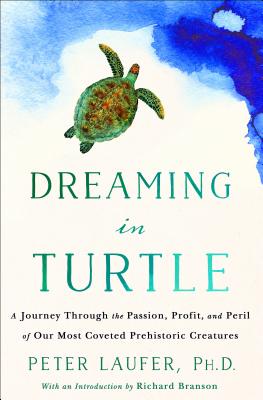 A Journey Through the Passion, Profit, and Peril of Our Most Coveted Prehistoric Creatures

A fascinating exploration into the world of turtles across the globe; Laufer charts the lore, love, and peril to a beloved species.

Dreaming in Turtle is a compelling story of a stalwart animal prized from prehistory through to today—an animal threatened by human greed, pragmatism, and rationalization. It stars turtles and shady and heroic human characters both, in settings ranging from luxury redoubts to degraded habitats, during a time when the confluence of easy global trade, limited supply, and inexhaustible demand has accelerated the stress on species. The growth of the middle class in high-population regions like China, where the turtle is particularly valued, feeds this perfect storm into which the turtle finds itself lashed. This is a tale not just of endangered turtles but also one of overall human failings, frailties, and vulnerabilities—all punctuated by optimistic hope for change fueled by dedicated turtle champions.


Praise For Dreaming in Turtle: A Journey Through the Passion, Profit, and Peril of Our Most Coveted Prehistoric Creatures…

"Laufer, who calls turtles 'the canaries in the coalmine called Earth where we all live,' views the process of saving them as being 'of existential importance to us all, and his book is a clear call for action...his love of [turtles] and the lore he includes makes this a highly readable book."—Kirkus Reviews

"An engrossing, well-researched celebration and study of turtles and tortoises. [A] love letter to the species that will appeal to those fascinated by turtles and who care about the conservation of endangered animals."—Library Journal

“Dreaming in Turtle is a masterpiece of nature writing. It provides the reader with an in- depth look at the horrors of the illicit global trade in turtles, and is also a beautifully written cultural history of turtles from Costa Rica to China. As these shelled wonders grow rarer, they need voices like Laufer’s to call attention to their plight.”—Craig Stanford, author of The Last Tortoise

“Everyone has a turtle story, argues investigative journalist Peter Laufer in this head-spinning book on these peaceful yet exploited creatures. From the swamps of Louisiana to squalid Asian live animal markets, Laufer introduces readers to a fascinating cast of saints and sinners including turtle poachers and pet smugglers, biologists and wildlife rehabbers. Alternately poignant and funny, Dreaming in Turtle deftly explores the complexities underlying our relationships with other species generally, whether they are objects of our affection, items on the menu, or illicit sources of guitar picks and leather boots.” —Hal Herzog, author of Some We Love, Some We Hate, Some We Eat: Why It’s So Hard To Think Straight About Animals

“Peter Laufer takes us into the world of turtles, and allows those slow, steady, clumsy, primitive throwbacks-to-the-dinosaurs to capture our imagination, sympathy and love. Land and sea, as varied as you and me, they are thought to have spiritual powers and to bring positive energy and good health. And who wouldn't want to be able to disappear into one's shell occasionally? As Laufer explains, we all have a turtle story.” —Rich Minner, producer, NBC Today Show

“Dreaming in Turtle is a love song to the turtles and tortoises that have populated our legends and parables since the beginning of time. It is easy and far too fashionable to wax poetic about the charismatic beasties—'the lions and tigers and bears, oh my,' in the midst of this sixth great extinction. With this book, Peter Laufer does something harder, and far more important. His quest to explore our relationship with these very special reptiles transcends investigative journalism to become an ode to what we should aspire to in our relationship with all of nature. Prepare to fall in love, and to start dreaming in turtle.” —Mark Bauman, former senior vice president Media, Smithsonian Institution

“Looking into a turtle’s face is looking into Deep Time. As Peter Laufer explains in Dreaming In Turtle, it is also looking at the near future, at the threat of extinction of these marvelous creatures that go back to the Age of Reptiles. Read this book and understand why we humans must prevent this irreversible break with a lineage so much deeper than our own species' comparatively brief time on this planet.” —Rick Ridgeway, vice president Environmental Affairs, Patagonia

“Dreaming in Turtle is a globalized paean to the turtle in all its forms—well researched, compellingly written, and deeply moving. As a Foreign Service Officer I was involved in a number of conservation efforts in Africa, and Laufer captures in this book, better than anything else I've read, the genetic necessity to try and understand life's complexities at all levels, and how all of our living colleagues on Earth—especially the mystical turtle—are symbiotically vital to our joint futures. This fine book does us proud.” —Eric Benjaminson, former U.S. Ambassador to Gabon and to Sao Tome & Principe

Journalist Peter Laufer is the James Wallace Chair Professor in Journalism at the University of Oregon School of Journalism and Communication. He is the author of Dreaming in Turtle: A Journey Through the Passion, Profit, and Peril of Our Most Coveted Prehistoric Creatures and Organic: A Journalist's Quest to Discover the Truth Behind Food Labeling.
Loading...
or
Not Currently Available for Direct Purchase