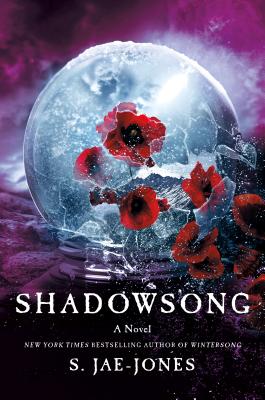 The conclusion to the gorgeous and lush Wintersong duology, Shadowsong by S. Jae-Jones.

Six months after the end of Wintersong, Liesl is working toward furthering both her brother’s and her own musical careers. Although she is determined to look forward and not behind, life in the world above is not as easy as Liesl had hoped. Her younger brother Josef is cold, distant, and withdrawn, while Liesl can’t forget the austere young man she left beneath the earth, and the music he inspired in her.

When troubling signs arise that the barrier between worlds is crumbling, Liesl must return to the Underground to unravel the mystery of life, death, and the Goblin King—who he was, who he is, and who he will be. What will it take to break the old laws once and for all? What is the true meaning of sacrifice when the fate of the world—or the ones Liesl loves—is in her hands?

“A maze of beauty and darkness, of music and magic and glittering things, all tied together with exquisite writing. This is a world you will want to stay lost in.”—Marie Lu, #1 New York Timesbestselling author


Praise For Shadowsong: A Novel (Wintersong #2)…

“Part ‘Labyrinth’, part Hades and Persephone myth, this is a ravishing exploration of longing, darkness, music, and mental illness.” --Shondaland

“SHADOWSONG perfectly ties up all the loose ends but leaves the reader wanting more. You will not want to miss this amazing tale; prepare to stay up late just to see what happens next.” --Romantic Times, 4 ½ stars Top Pick!

S. Jae-Jones (called JJ) is an artist, an adrenaline junkie, and erstwhile editrix. When not obsessing over books, she can be found jumping out of perfectly good airplanes, co-hosting the Pub(lishing) Crawl podcast, or playing dress-up. Born and raised in Los Angeles, she now lives in North Carolina, as well as many other places on the internet, including Twitter, Tumblr, Facebook, Instagram, and her blog.
Loading...
or
Not Currently Available for Direct Purchase