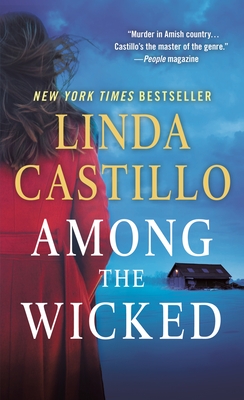 Among the Wicked (Mass Market)

EVIL LURKS JUST BENEATH THE SURFACE IN AN ISOLATED AMISH COMMUNITY IN AMONG THE WICKED, THE LATEST ELECTRIFYING THRILLER FROM NEW YORK TIMES BESTSELLING AUTHOR LINDA CASTILLO.

Chief of Police Kate Burkholder is called upon by the sheriff’s department in rural upstate New York to investigate the death of a young girl in a reclusive Amish settlement. Unable to penetrate the wall of silence between the Amish and the “English” communities, the sheriff asks Kate to pose as an Amish woman and find out what really happened.
“Razor-sharp. .compelling. . .exquisite.”—Criminal Element

Kate, who grew up among the Amish, knows what she’s doing. . .and what she’s in for. Her longtime love interest, State Agent John Tomasetti, is dead-set against her taking on the assignment, but Kate can’t turn her back—especially when the rumor mill boils with disturbing accounts of other children in danger.Once she goes deep undercover and infiltrates the community, she Kate unearths a world built on secrets and lies, and a series of crimes more shocking than she could have ever imagine. And soon she finds herself helpless and alone, cut off from the rest of the world. . .and trapped in a fight for her life.

“Readers will be enthralled…”—Publishers Weekly

Linda Castillo is the New York Times bestselling author of the Kate Burkholder novels, including Sworn to Silence which was adapted into a Lifetime Original Movie titled An Amish Murder starring Neve Campbell as Kate Burkholder. Castillo is the recipient of numerous industry awards including a nomination by the International Thriller Writers for Best Hardcover, the Daphne du Maurier Award of Excellence, and a nomination for the RITA. In addition to writing, Castillo’s other passion is horses. She lives in Texas with her husband and is currently at work on her next novel.
or support indie stores by buying on
(This book is on backorder)
Copyright © 2020 American Booksellers Association