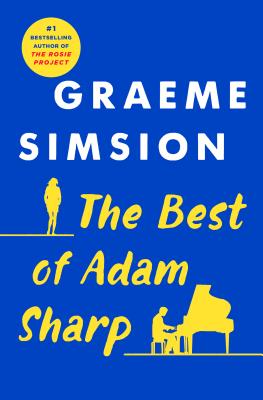 The Best of Adam Sharp

From the bestselling author of The Rosie Project comes a romantic novel about true love, second chances, and decades of great music.

Two decades ago, Adam Sharp’s piano playing led him into a passionate relationship with Angelina Brown, an intelligent and strong-willed actress. They had a chance at something more—but Adam didn’t take it.

Now, on the cusp of turning fifty, Adam likes his life. He’s happy with his partner Claire, he excels in music trivia at quiz night at the local pub, he looks after his mother, and he does the occasional consulting job in IT. But he can never quite shake off his nostalgia for what might have been. And then, out of nowhere, from the other side of the world, Angelina gets in touch. What does she want? Does Adam dare to live dangerously?

Set to the soundtrack of our lives, The Best of Adam Sharp by Graeme Simsion follows along with emotion and humor as one man looks back on his past and decides if having a second chance is worth the risk.
One of Glamour Magazine's “Most Anticipated Books of 2017”•"20 Must-Read Books for Spring 2017" from Redbook

Praise for The Best of Adam Sharp:

"This dazzling story about a former pianist who has a second chance in midlife with his former actress flame will do some major heart-warming this Spring — and readers will never foresee the incredible ending." —POPSUGAR
"It's a fun sweet ride." —The Washington Post

“An extraordinary literary treat that reminds readers the best things in life have nothing to do with plans.” —Redbook


Praise For The Best of Adam Sharp: A Novel…

Praise for The Best of Adam Sharp:

One of Glamour's "Most Anticipated Books of 2017"

Praise for The Rosie Effect

“One of the best novels I’ve read in ages…Sweet, entertaining, and thought-provoking.” —Bill Gates

“There’s a moral to this quirky story: The best things in life can’t be planned on a spreadsheet.” –Good Housekeeping

“This rom-com is bursting with warmth, emotional depth, and intentional humor.” —Entertainment Weekly

“The hype is justified. Australian Graeme Simsion has written a genuinely funny novel... This is classic rom-com.” —The Washington Post

“Simsion’s attention to detail brings to life Don’s wonderful, weird world. Instead of using Don’s Asperger’s syndrome as a fault, or a lead-in to a tragic turn of events, Simsion creates a heartwarming story of an extraordinary man learning to live in an ordinary world, and to love. As Don would say, this book is ‘great fun.’” —USA Today

“An utterly winning screwball comedy. . . This charming, warmhearted escapade, which celebrates the havoc—and pleasure—emotions can unleash, offers amusement aplenty. Sharp dialogue, terrific pacing, physical hijinks, slapstick, a couple to root for, and more twists than a pack of Twizzlers.” —NPR.org

GRAEME SIMSION is a former IT consultant and the author of two nonfiction books on database design who decided, at the age of fifty, to turn his hand to fiction. His first novel, The Rosie Project, was published in 2013 and translation rights have been sold in over thirty-five languages. Graeme lives in Australia with his wife, Anne, and their two children.
Loading...
or
Not Currently Available for Direct Purchase