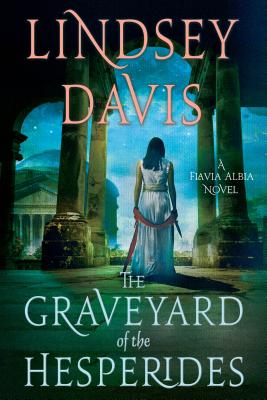 The Graveyard of the Hesperides (Paperback)

In first century Rome, Flavia Albia, the daughter of Marcus Didius Falco, has taken up her father's former profession as an informer. On a typical day, it's small cases---cheating spouses, employees dipping into the till---but this isn't a typical day. Her beloved, the plebeian Manlius Faustus, has recently moved in and decided that they should get married in a big, showy ceremony as part of beginning a proper domestic life together. Also, his contracting firm has been renovating a rundown dive bar called The Garden of the Hesperides, only to uncover human remains buried in the backyard. There have been rumors for years that the previous owner of the bar, now deceased, killed a bar maid and these are presumably her remains. In the choice between planning a wedding and looking into a crime from long ago, Albia would much rather investigate a possible murder. Or murders, as more and more remains are uncovered, revealing that something truly horrible has been going on at the Hesperides.

As she gets closer to the truth behind the bodies in the backyard, Albia's investigation has put her in the cross-hairs---which might be the only way she'll get out of the wedding and away from all her relatives who are desperate to 'help.'

Praise For The Graveyard of the Hesperides: A Flavia Albia Novel (Flavia Albia Series #4)…

"Well-researched but never heavy-handed in presenting its scholarship, The Graveyard Of The Hesperides is an entertaining tale of detection in Ancient Rome, with a heroine whose opinions are easy to sympathize with, despite the gap of centuries." - Criminal Element

"This is the probably the best of the Falco stories so far, by turns brutal and brilliant, but always clever and witty with some sparkling dialogue and genuinely comic moments, offset by shrewd social comment and a surprisingly touching love story. It’s set against a totally believable and colourful background, and rattles along at breakneck pace to a spectacular climax." - Crime Review