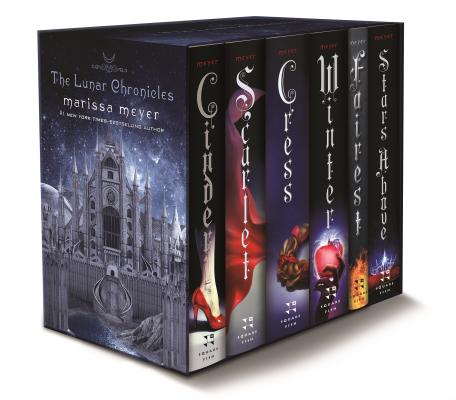 The #1 New York Times-bestselling series that brought fans a complex and thrilling world of cyborgs and evil queens, available together for the first time in one beautiful boxed set

"Singing mice and glass slippers are replaced with snarky androids and mechanical feet in this richly imagined and darkly subversive retelling of ‘Cinderella.' " —The Bulletin on Cinder

“Meyer's series has sold well and achieved a degree of acclaim. This conclusion's cinder-block size should only drum up further interest.” —Booklist, starred review of Winter

“Those who have enjoyed Meyer’s sci-fi fairy tale retellings will relish the chance to dip their toes more deeply into this rich world.” —VOYA, starred review for Stars Above

Marissa Meyer is the #1 New York Times–bestselling author of the Renegades Trilogy, The Lunar Chronicles series, the Wires and Nerve graphic novels, and The Lunar Chronicles Coloring Book. Her first standalone novel, Heartless, was also a #1 New York Times bestseller. Marissa created and hosts a podcast called The Happy Writer. She lives in Tacoma, Washington, with her husband and their two daughters.
Loading...
or
Not Currently Available for Direct Purchase