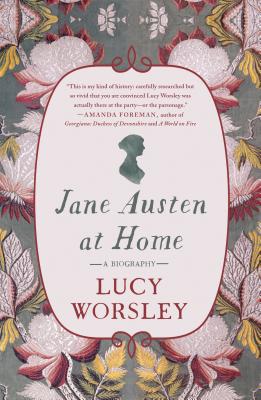 "Jane Austen at Home offers a fascinating look at Jane Austen's world through the lens of the homes in which she lived and worked throughout her life. The result is a refreshingly unique perspective on Austen and her work and a beautifully nuanced exploration of gender, creativity, and domesticity."--Amanda Foreman, bestselling author of Georgianna, Duchess of Devonshire

Take a trip back to Jane Austen's world and the many places she lived as historian Lucy Worsley visits Austen's childhood home, her schools, her holiday accommodations, the houses--both grand and small--of the relations upon whom she was dependent, and the home she shared with her mother and sister towards the end of her life. In places like Steventon Parsonage, Godmersham Park, Chawton House and a small rented house in Winchester, Worsley discovers a Jane Austen very different from the one who famously lived a 'life without incident'.


Praise For Jane Austen at Home: A Biography…

"Worsley offers us much that Austen's admirers wish to know...with humor and poignancy and common sense, just as Austen would have wished."—Amy Bloom, New York Times Book Review


" ...A personal look inside the life of a singular woman.... [the] intimate spaces in both this book and in Austen’s original works fly off the page in full-fledged color." —Madeleine Luckel, Vogue

"Worsley writes with a historian's acumen and a Janeite's passion...This volume is sure to delight Austen fans."—Library Journal, Starred Review


"Jane Austen at Home offers a fascinating look at Jane Austen's world through the lens of the homes in which she lived and worked throughout her life. The result is a refreshingly unique perspective on Austen and her work and a beautifully nuanced exploration of gender, creativity, and domesticity." - Amanda Foreman, bestselling author of Georgianna, Duchess of Devonshire

LUCY WORSLEY is an historian, author, curator and television presenter. Lucy read Ancient and Modern History at New College, Oxford and worked for English Heritage before becoming Chief Curator of Historic Royal Palaces, based at Hampton Court. She also presents history programmes for the BBC including Empire of the Tsars: Romanov Russia with Lucy Worsley and Lucy Worsley's Reins of Power: The Art of Horse Dancing. Her bestselling books include A Very British Murder: The Curious Story of how Crime was Turned into Art; If Walls Could Talk: An Intimate History of the Home; Courtiers: The Secret History of the Georgian Court; and Cavalier: The Story of a 17th Century Playboy. She lives in London, England.
Loading...
or
Not Currently Available for Direct Purchase