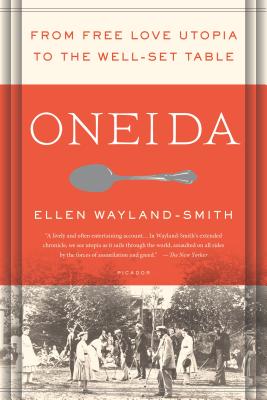 A fascinating and unusual chapter in American history about a religious community that held radical notions of equality, sex, and religion—only to transform itself, at the beginning of the twentieth century, into a successful silverware company and a model of buttoned-down corporate propriety.

In the early nineteenth century, many Americans were looking for an alternative to the Puritanism that had been the foundation of the new country. Amid the fervor of the religious revival known as the Second Great Awakening, John Humphrey Noyes, a spirited but socially awkward young man, attracted a group of devoted followers with his fiery sermons about creating Jesus’ millennial kingdom here on Earth. Noyes established a revolutionary community in rural New York centered around achieving a life free of sin through God’s grace, while also espousing equality of the sexes and “complex marriage,” a system of free love where sexual relations with multiple partners was encouraged. Noyes’s belief in the perfectibility of human nature eventually inspired him to institute a program of eugenics, known as stirpiculture, that resulted in a new generation of Oneidans who, when the Community disbanded in 1880, sought to exorcise the ghost of their fathers’ disreputable sexual theories. Converted into a joint-stock company, Oneida Community, Limited, would go on to become one of the nation’s leading manufacturers of silverware, and their brand a coveted mark of middle-class respectability in pre- and post-WWII America.

Told by a descendant of one of the Community’s original families, Ellen Wayland-Smith's Oneida is a captivating story that straddles two centuries to reveal how a radical, free-love sect, turning its back on its own ideals, transformed into a purveyor of the white-picket-fence American dream.


Praise For Oneida: From Free Love Utopia to the Well-Set Table…

"A lively and often entertaining account.... In Wayland-Smith’s extended chronicle, we see utopia as it sails through the world, assaulted on all sides by the forces of assimilation and greed."—The New Yorker

"Wayland-Smith is a gifted writer. Her lively account of how Oneida eventually succumbed to 'the gods of Science and Doubt' is a welcome change from most 'as told by' family histories."—The New York Times Book Review

“An incredible story.”—WBUR’s Here and Now

"Drawing from letters, diaries, newsletters, and family stories, the author, an original-family descendant, adds inside information to this retelling of a radical movement’s transformation in the shifting current of American ideals. The narrative is engaging and detailed. This is a must-read for those interested in American social history, and should have broad appeal."—Booklist (starred review)

“[An] impressively thorough and engaging work…. This book is a fascinating look into the strange history of Oneida silverware and how its origins reflect an exhilarating period of American history.”—Publishers Weekly (starred review)

“This compelling narrative seamlessly threads the unlikely alliance between a ‘free love utopia’ and a household brand name. Fans of Joseph Ellis and David McCullough will appreciate this engrossing entry.”—Library Journal (starred review)

“The spotlight Wayland-Smith shines on this remarkable community's beginnings and ending offers a riveting glimpse into the quintessentially American early-19th-century struggle with the rights of the individual and separation of church and state. A smartly contextualized tale of ‘the tension between radical social critique and unapologetic accommodation….between communal harmony and individual striving.’”—Kirkus Reviews

Ellen Wayland-Smith teaches in the Writing Program at the University of Southern California, and received her PhD. in Comparative Literature from Princeton University. A descendent of John Humphrey Noyes, the founder of the Oneida community, she lives in Los Angeles with her family.
Loading...
or
Not Currently Available for Direct Purchase