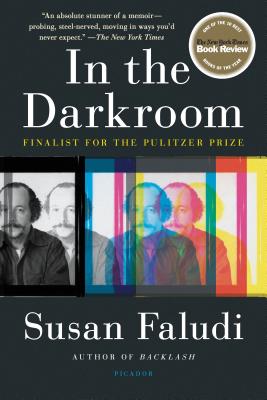 When feminist writer Susan Faludi learned that her seventy-six-year-old father—long estranged and living in Hungary—had undergone sex reassignment surgery, the revelation would launch her on an extraordinary inquiry into the meaning of identity in the modern world and in her own haunted family saga. How was this new parent who identified as “a complete woman now” connected to the silent, explosive, and ultimately violent father she had known, the photographer who’d built his career on the alteration of images?

Faludi chases that mystery into the recesses of her suburban childhood and her father’s many previous incarnations: American dad, Alpine mountaineer, swashbuckling adventurer in the Amazon outback, Jewish fugitive in Holocaust Budapest. When the author travels to Hungary to reunite with her father, she drops into a labyrinth of dark histories and dangerous politics in a country hell-bent on repressing its past and constructing a fanciful—and virulent—nationhood.

Faludi’s struggle to come to grips with her father’s metamorphosis takes her across borders—historical, political, religious, sexual—to bring her face to face with the question of the age: Is identity something you “choose,” or is it the very thing you can’t escape?

“This book is a masterpiece.”—Ann Patchett

“In the Darkroom is an absolute stunner of a memoir—probing, steel-nerved, moving in ways you’d never expect. Ms. Faludi is determined both to demystify the father of her youth—‘a simultaneously inscrutable and volatile presence, a black box and a detonator’—and to reexamine the very notion and nature of identity.”—The New York Times (daily review)

“A gripping and honest personal journey...that ultimately transcends family and addresses much bigger questions of identity and reinvention.”—Entertainment Weekly

“Riveting...Ms. Faludi unfolds her father’s story like the plot of a detective novel.”—The Wall Street Journal

“Many great writers eventually turn to biography, but rarely does it so directly crash into their lifelong intellectual pursuits....Few can dissect a prevailing cultural norm as well as Faludi can.”—The Washington Post

“Faludi’s eloquent, timely, and sweeping-yet-intimate new book...is a mash-up of genres and themes about family secrets, masculinity and femininity, feminism, violence, the Holocaust, taking revenge. Knitting it all together are questions of identity: Who—or what—makes us who and what we are? How immutable is the end result?”—Elle

“Sometimes, reality delivers up not just a remarkable story, but a remarkable story containing a set of parallel motifs that seem too absurdly perfect to be credible. . . . Most of In the Darkroom, and the best of it, consists of the epic battle, and eventually the epic rapprochement, between Susan and [her father] Stefánie—an irresistible force meeting an immovable object.”—Slate

“Extraordinary: part riveting family memoir, part revelatory Holocaust history, but most of all a profound meditation on human identity....In the Darkroom is nothing if not timely. It is also highly significant....We live in an age overflowing with bitter battles over identity—with too little of Susan Faludi’s humane desire to understand.”—The National Book Review

“A wrought and multilayered memoir...Powerful and absorbing.”—Publishers Weekly (starred review)

“A moving and penetrating inquiry into manifold struggles for identity, community, and authenticity.”—Kirkus Reviews (starred review)

“A record of Stefanie Faludi's extraordinary life, and an unsettling interrogation of that modern obsession, identity....Few have asked these questions with such riveting precision.”—The Spectator (UK)

“In the Darkroom is a unique, deeply affecting and beautifully written book, full of warmth, intelligence and...humour. It makes a flawless weave of biography and autobiography with an examination of identity politics, Hungarian history, the Holocaust and the reparable bond between parent and child.”—The Saturday Paper (Australia)

Susan Faludi is a Pulitzer Prize–winning journalist and the author of The Terror Dream, Stiffed, and Backlash, which won the National Book Critics Circle Award for Nonfiction. A former reporter for The Wall Street Journal, she has written for The New Yorker, The New York Times, Harper’s, and The Baffler, among other publications.
Loading...
or
Not Currently Available for Direct Purchase