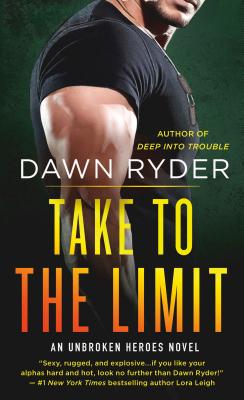 Take to the Limit

They are part of an elite unit. On task. Off grid. These are the men of the Shadow Ops task force. Be seduced and thrilled by Take to the Limit, the next Unbroken Heroes novel by Dawn Ryder.


Holding out for a hero

A hardened military machine, Bram Magnus is a tough, combat-ready, all-American hero who never surrenders. But the one thing he can’t fight? His smoldering, intense attraction to his girlfriend’s younger sister. He’s always kept his feelings locked deeply down. But when his girlfriend betrays him the night before he ships off to Afghanistan, Bram has one chance to show the woman he’s resisted for years that he wants her as fiercely as the first day he saw her.

Ever since her older sister first brought home the soldier with steely hard muscles and piercing eyes, Jaelyn has wanted Bram, and when her sister casts him aside the night before he leaves, Jaelyn can’t resist one steamy hot kiss with him. But danger is not far behind, and even as a deadly enemy hunts them, their relationship only grows more explosive. It’s all Bram can do to keep Jaelyn safe, but with a threat this powerful, will they pay the ultimate price for their passion?


Praise For Take to the Limit: An Unbroken Heroes Novel…

"Sexy, rugged, and explosive, the Unbroken Heroes series is a scorching hot read. If you like your alphas hard and hot, look no further than Dawn Ryder!" - #1 New York Times bestselling author Lora Leigh

"Action-packed, steamy and intense!" - Fresh Fiction on Take to the Limit

"Sensual, hot and good amount of humor, Ryder tells a tale with heart pounding suspense, a swoon worthy romance." -- Tome Tender on Take to the Limit

"Sexy and provocative." - Publishers Weekly on Deep Into Trouble

"An engaging and enthralling tale...captivating and compelling...Dare You To Run is a passionate and impressive addition to Dawn Ryder’s Unbroken Heroes; a must-read for fans of romantic suspense and military heroes." - The Reading Cafe on Dare You To Run

A heart-stopping roller-coaster ride. —Publishers Weekly on Dangerous to Know

Dawn Ryder is the contemporary romance pen name of a bestselling author of historical romances—her official naughty inner child. The author of Dangerous to Know, she commercially publishes in mass market and trade paper, and digi-first published with trade paper releases. She is hugely committed to her career as an author, as well as to other authors and to her readership. She lives in Southern California.
Loading...
or
Not Currently Available for Direct Purchase