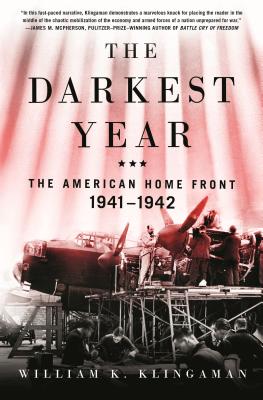 “A fascinating look at the home front during a pivotal moment in time.” —New York Post

"This expansive survey paints an extraordinary portrait of America’s home front during the first year of WWII...Klingaman uses media, literature, journals, and letters to illustrate the year, and the resulting history is riveting." —Publishers Weekly (Starred Review)

"The appeal of The Darkest Year is in enabling readers to feel the immediacy of well-known historical events as they unfolded. [It] successfully evokes a sense of what life was like during an anxious time."—Christian Science Monitor

"In this fast-paced narrative of the American home front during the first year of the country's participation in World War II, Will Klingaman demonstrates a marvelous knack for placing the reader in the middle of the chaotic mobilization of the economy and armed forces of a nation unprepared for war. Shortages, rationing, and confusion in the conversion of industry to war production gave only fitful promise in 1942 of America's eventual emergence as the arsenal of democracy."—James M. McPherson, Professor of History Emeritus, Princeton University, and Pulitzer-Prize-winning author of Battle Cry of Freedom

"Klingaman deftly navigates the ensuing roller-coaster of unease and complacency that characterized home front sentiments during the first year of U.S. involvement in World War II. This thoroughly researched and accessible text will prove elucidating to anyone curious about social history, World War II, or the rhetoric of a country in crisis."—Library Journal (starred review)

"So many of us learned in high school that the misery of the Great Depression was defeated by the victory of World War II. Missing from that overview, however, was the moment when many Americans were afraid that we might lose to Hitler, and that our country would cease to exist. The Darkest Year reveals that soul-stirring moment in all its detail." —Craig Nelson, author of Rocket Men and Pearl Harbor

"In stitch and scope, Klingaman's vast tapestry depicts in a swift narrative Americans' struggles as they came to grips with the demands and terror of World War II. This is the book to start with to understand how total war transformed a once-reluctant home front into a launch pad for victory."–Marc Wortman, author of 1941: Fighting the Shadow War

"[A] vigorous narrative.The author is good at teasing out small but telling detail...[and] also delivers entertaining anecdotes. A welcome study of an aspect of wartime history that is little known among those too young to have experienced it."—Kirkus reviews

WILLIAM K. KLINGAMAN has taught at the University of Virginia and the University of Maryland. He is the co-author The Year Without Summer with Nicholas P. Klingaman, as well as the author of narrative histories of the years 1918, 1929 and 1941.
or support indie stores by buying on