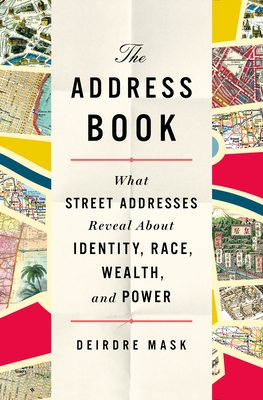 "An entertaining quest to trace the origins and implications of the names of the roads on which we reside." —Sarah Vowell, The New York Times Book Review

In this wide-ranging and remarkable book, Deirdre Mask looks at the fate of streets named after Martin Luther King Jr., the wayfinding means of ancient Romans, and how Nazis haunt the streets of modern Germany. The flipside of having an address is not having one, and we also see what that means for millions of people today, including those who live in the slums of Kolkata and on the streets of London. Filled with fascinating people and histories, The Address Book illuminates the complex and sometimes hidden stories behind street names and their power to name, to hide, to decide who counts, who doesn’t—and why.

“An impressive examination of the origins of street names around the world….It’s a damning look at the intersection of place, power and identity, tied together through Mask’s absorbing and thoughtful voice.”—Time, “100 Must-Read Books of 2020”

"Mask’s fascinating study is filled with insights into how addresses affect ordinary people around the world." —PD Smith, The Guardian (UK)

“A radical treatise on class divisions in a nation that too often insists none exist.”—Bethanne Patrick, Washington Post

"Read Deirdre Mask’s fascinating deep dive into the world of Mill Lane and Martin Luther King Street and you will begin to realise just how important these geographical markers are, how pregnant with meaning, and what a difference they make to everything from the proper functioning of society to questions of wealth, poverty and democracy...Highly entertaining."—Andrew Holgate, The Sunday Times (UK)

“An impressive book-length answer to a question few of us consider: "Why do street addresses matter?" In her first book, Mask combines deep research with skillfully written, memorable anecdotes to illuminate the vast influence of street addresses as well as the negative consequences of not having a fixed address....Throughout this eye-opening book, the author clearly demonstrates that package deliveries constitute a minuscule part of the significance of addresses—not only today, but throughout human history.—Kirkus Review (starred)

"This is a fascinating volume revealing the racism and classism behind the street names and house numbers of the places in which we live. Deirdre Mask’s impeccable research and memorable stories make for a compelling history.”—Karla Strand, Ms. Magazine